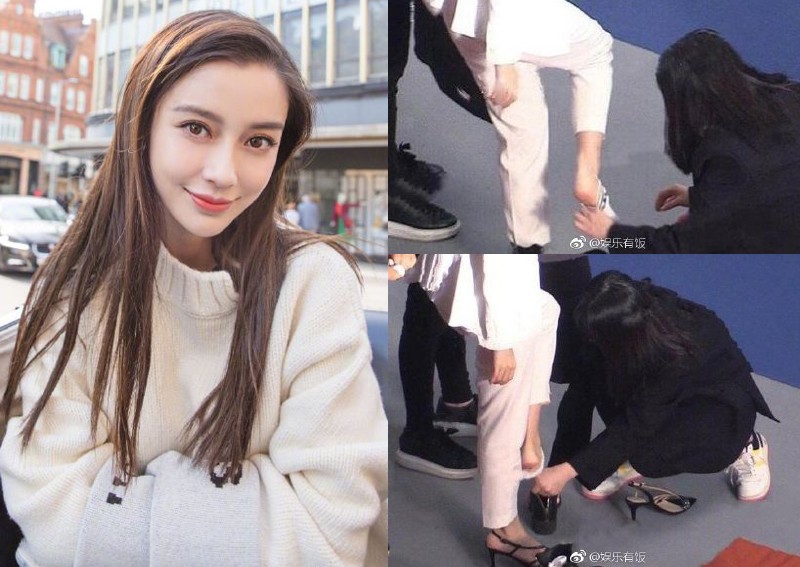 How much of a diva is Angelababy?

That's the question on netizens' lips, after images leaked online purportedly showed the actress needing help from her assistant to take off her socks and put on her shoes.

In the photos, a woman (whose face is cropped out) is dressed in a white pantsuit while another lady who appears to be her assistant kneels at her feet. The assistant takes her boots and socks off before slipping her tootsies into a pair of heels.

What's not clear though is where the photos were taken.

Believing that the photos show the 29-year-old wife of Chinese actor Huang Xiaoming, comments on the shots ranged from derision to envy: "She's not that great but she put on airs"; "It's so nice to be a star"; "She didn't even need to bend over."

Some also accused her of suffering from "princess syndrome" -- a term used to describe spoilt and entitled women, particularly in Hong Kong.

Another burning question on netizens' minds: "How much is her assistant getting paid to do this?"

However, other commenters gave a plausible explanation for the scenario.

They suggested that the actress could have been on a film set, thereby needing an assistant's help to change out of her outfits without messing up her clothes or hair -- apparently a norm in the industry.

But when you're a commoner like us, the act is far less defensible.

Well, what can we say, this is one Baby that needs looking after.