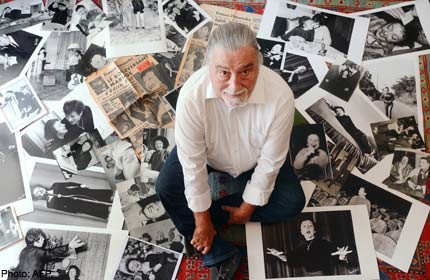 PARIS - Even as she lay dying, Edith Piaf continued to carefully control her image - one that made her a star and, 50 years after her death, a legend in her native France and around the world.

At 47 and dying of liver cancer, Piaf ruled that only her personal photographer, Hugues Vassal, would be allowed to capture the images of her final days.

Tearing up as he recalled taking his last pictures of the diminutive star, Vassal said that even at the end of her life Piaf insisted - as always - on personally approving each photograph.

"She knew she would go down in history and she wanted control over the photographs that we would keep of her," said the 80-year-old Vassal, who was Piaf's photographer in the last six years of her life.

It was a final act of career choreography from a star whose phenomenal success was based not only on prodigious talent but also on a carefully shaped public image that persists to this day.

When she died on October 10, 1963, Piaf was France's greatest global star and the first to conquer America.

She remains one of the best-known French performers abroad. A 2007 film about her life titled "La Vie en Rose" was popular worldwide and earned an Academy Award for actress Marion Cotillard.

But as the landmark anniversary of her death is marked, new material claims that Piaf - or the "Little Sparrow" to her legion of adoring fans - made up or encouraged a number of falsehoods about her life.

Not weaned on red wine

Robert Belleret, who wrote the just-published "Piaf, a French Myth", said the star, who was born Edith Gassion, did not come into the world on the streets as widely claimed but at a hospital in Paris's working-class 20th district on December 15, 1915.

The book draws on scores of unpublished letters written by Piaf to her confidant, poet Jacques Bourgeat, among other personal papers and correspondence.

While one biographer said she was cured of childhood blindness after a pilgrimage, and Piaf herself spoke of a miraculous healing, the new book says she did not, as widely reported, suffer from blindness as a child.

Piaf's early years were difficult, with her mother - a singer - abandoning her. She was brought up by her grandmothers, but was not weaned on red wine, the book says. Another myth.

Belleret also says the iconic singer had no political conscience and dismisses her claim that she passed on fake papers to prisoners in German camps during World War II.

Rather, she moved house in 1942 to an area close to the Gestapo headquarters in German-occupied Paris.

Still, no one doubts that the deep well of emotion running through Piaf's songs was born from her own tragic life.

Her only child, a daughter born when Piaf was only 17, died at the age of two from meningitis.

The love of Piaf's life, married French boxer Marcel Cedran, died in a plane crash while travelling from Paris to New York.

She struggled most of her life with alcoholism and drug problems, suffering three near-fatal car crashes.

But thousands followed her funeral procession through the streets of Paris before she was buried in the city's famed Pere Lachaise cemetery.

After she died, photographer Vassal worked with a who's who of the French stars that followed in her wake, including Charles Aznavour, Serge Gainsbourg and Johnny Hallyday.

But there was never anyone like Piaf, he said. "She had an incredible magnetism."