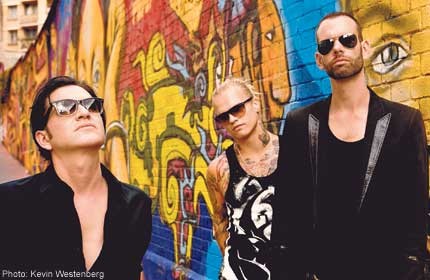 SINGAPORE - British alternative-rock band Placebo are set to return to Singapore next Tuesday for a highly anticipated concert at The Coliseum, at the Hard Rock Hotel in Resorts World Sentosa, following their 2010 gig at Fort Canning Park.

My Paper speaks over the phone with bassist Stefan Olsdal, 39, about their seventh studio album, Loud Like Love, set to be released on Sept 16.

What does the album name, Loud Like Love, mean to you?

What do you expect listeners to get from the album?

There are a lot of emotions and colour in this record. It's both emotional and exciting at the same time.

Why did you choose Too Many Friends as the first song for release from Loud Like Love?

It just kind of shows itself. (The song) just seemed to present itself from the way it starts with the piano, which...reminds us of the epic pop songs of the 1980s, like Total Eclipse Of The Heart, and then, with the big chorus, it just seemed to be the obvious single for us.

What have you been working on individually?

I have a few other projects with friends.

I like to make music for fun, to write, record and make videos for a transvestite here in London.

These are things that I like to have on the side, in order for me to have a more objective perspective on Placebo, which is my main driving force.

What is your favourite Placebo song of all time?

Bosco, the last track off the new record. The song that, for me, kind of transcends what I never expected Placebo to do.

What kind of music do you listen to these days?

Music without distorted guitars , that doesn't resemble what we do.

It has to be contemplative, modern, piano music. Classical piano.

Players like Nils Frahm from Germany and Olafur Arnalds from Iceland.

Just music that takes me away from conventional pop structures or rock music, or music with lyrics.

I find that it gives me a break, and refreshes and restores my musical brain.

Otherwise, if I listen to the same type of music all the time, I would feel saturated.

Will you be playing any songs from your new album at your show here?

We'd like for people to hear the new songs when the record comes out, rather than on a badly recorded YouTube clip that someone had filmed at the concert, so we're not going to play that many songs from the new record. But there will be a few.

Then, as always, we will try to choose a set list that we feel we can connect with emotionally and, at the same time, try to play some songs that have been crowd favourites in the past.