Review: Descendants Of The Sun finale is ho-hum, with less drama than romcom filler 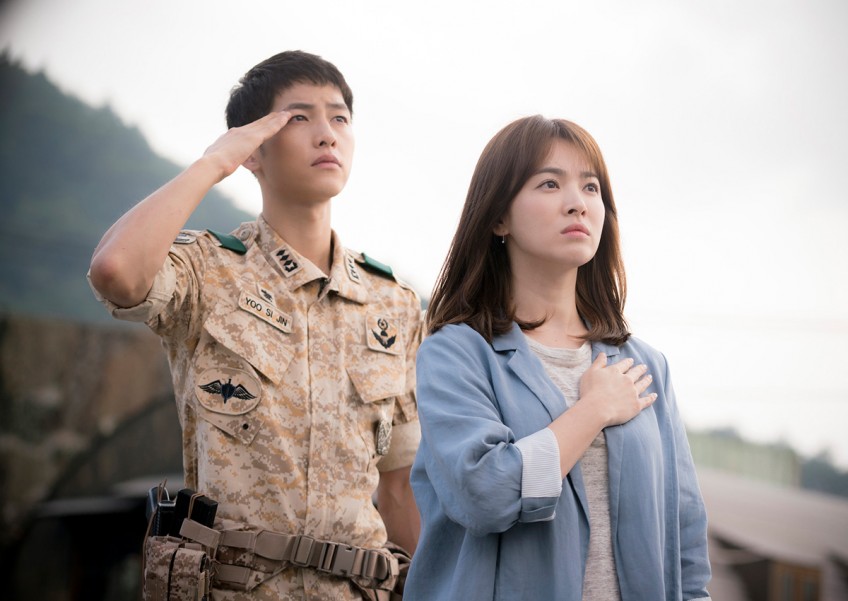 If you haven't heard of Descendants of the Sun, the latest Korean drama to dominate Asian entertainment, you must be living under a very big rock.
KBS World

DESCENDANTS OF THE SUN FINALE

Soon the guys are back at the South Korean military headquarters, brainstorming - actually, it is more accurate to call it "braindrizzling" - what to write in their reports on their capture and torture by a foreign militia.

"At this point, I think anything we write will go. What we need is a perfect balance of reality and drama," Captain Yoo says, as he suggests a movie they can copy from.

It's the finale. Captain Yoo is in one piece, his face and sense of humour intact, after a series of close shaves and ominous forewarnings. What more do K-drama fans around the world want?

This is also the point where writer Kim Eun Sook gives herself a free pass and dispenses a ho-hum episode that has less drama than romcom filler in it, as the guys and girls go on working, dating, squabbling, joking and planning holidays - like regular adults. Much of the finale is sugary and flat, like a fizzy drink that has been left open too long.

Then again, as K-romances go, Descendants Of The Sun has always been a more grown-up fantasy than, say, My Love From The Star (2013).

My Love had a super boyfriend, an alien with superhuman powers and zero interest in saving anyone who isn't his girlfriend.

Descendants doesn't. As wonderful as Captain Yoo may seem, he can be a rather real and rather awful boyfriend.

The giddy romance of the show is driven by how far Captain Yoo - intensity, hard-edged masculinity and special forces training in a baby-faced package - will go to impress Dr Kang Mo Yeon (Song Hye Kyo), chase her and save her.

The realism and the emotional weight come in her understanding that he isn't her personal superhero. He is a hero, and sometimes, just a guy.

Sure, he takes a bullet for her in Episode 12. A couple of episodes later, he also takes several bullets for some North Korean soldier he barely knows. He is then sent to her hospital, covered in blood, and now she has to save his life.

She also walks in on him in his ward afterwards, when he is trying to undress and change back into a patient's uniform. She has been worried about him, but he is already sneaking out for yet another hush-hush assignment. He is cheating on her with their country, essentially, but she can't really complain.

Although the soundtrack suggests otherwise, with songs such as You Are My Everything, she isn't his everything. Nor is he hers.

They are adults with lives of their own and jobs they are good at. And so it is apt that the show ends not when a character, at a wedding attended by the soldiers and the doctors, turns to the camera and declares: "The end", but when an emergency strikes during the event.

What's a red-letter day for our restless heroes and heroines without some action?

This article was first published on April 15, 2016.
Get a copy of The Straits Times or go to straitstimes.com for more stories.