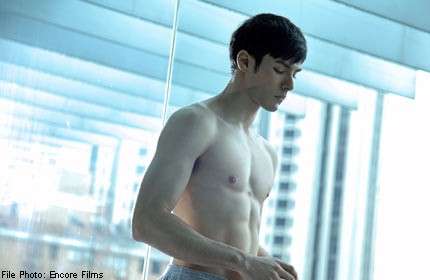 SINGAPORE - It was the men who had to grin and bare it in the hit China film Tiny Times.

In preparation for the movie about four young women and their adventures in love and life in Shanghai, Taiwanese-British actor Rhydian Vaughan received only a brief note.

Speaking over the telephone from Taipei, the 25-year-old says: "Mine just had three words - 'lian fu ji'." It meant "train abdominal muscles".

He took the words to heart but did not hit the gym as director Guo Jingming had also told him his character of the demanding magazine editor Gong Ming "has to be slim but strong".

Vaughan figured that if he went to the gym, he would get too buff. Instead, he did yoga, ran and skipped, working out for an hour and a half in the morning and another hour at night.

Given that Kai Ko, Cheney Chen and Calvin Tu - the other male cast members in the film, which opens here tomorrow - also had to bare their torsos, one may wonder if there was any friendly competition going on behind the scenes.

Vaughan chuckles and says: "I think it's just audiences doing the comparing."

The bigger challenge was probably getting into the privileged Gong Ming's head. Vaughan, whose Taiwanese mother is a performance artist and British father is a violinist, says: "He's someone who lives in a completely different world, and his background, his interests are all different from mine."

Eventually, he found some common ground between real and reel: "One thing we have that is similar is the passion we have for our jobs. We want things to be perfect and even give ourselves a lot of pressure."

He actually drew up a schedule for Gong Ming - what time he would get up, exercise, have breakfast and so on - until he became familiar with the rhythms of his character's life.

While the movie has enjoyed success at the box office in China, it has also come in for its share of criticism, particularly for its brash materialism.

Vaughan, who is not married, shrugs off the flak, saying: "Whether opinions are positive or negative, it's all good as it means that the movie has sparked discussion."

The success of Tiny Times has certainly been good for him personally. It raised his profile in China and his Weibo microblog now has more than 1.8 million followers.

He is not about to pack his bags and head for the mainland, though.

"I think I'm very lucky. I'm a new Taiwanese actor and I'm just riding the boom in the Asian film industry these past few years. As long as there are good scripts and good teams, I'll be happy working anywhere," says Vaughan, whose resume includes the gangster flick Monga (2010) and the romance compendium Love (2012).

His exotic looks do not limit the range of roles available to him: "That's not been a problem so far. Before filming Monga, I thought that I couldn't possibly act as a Taiwanese gangster but that's what I did."

So does he have a plan B, like Gong Ming always does, if acting does not pan out?

He says, with a measure of confidence: "Only after falling down will I think of how to get up and carry on."

Tiny Times is in cinemas.