A Rocket To The Moon concert on Aug 27 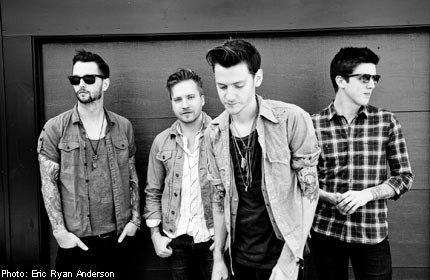 A Rocket To The Moon members (from left to right) Eric Halvorsen, Justin Richards, Nick Santino and Andrew Cook.

No band? No problem.

Andrew Cook, of US rock act A Rocket To The Moon, is keeping himself busy even as the curtains are coming down on the band's seven-year run.

The drummer, 29, is dedicating his blocks of free time to his other interests, which include writing and painting.

Cook told LOUD over the phone while visiting his parents in Massachusetts, US, last week: "When I was younger, I used to draw all the time.

"I make a lot of art in my spare time - street art, stencils, spray painting. I like writing, too. Art, writing, music and football have always been my passion, so I will do a lot of all that after this."

In a shocking move, A Rocket To The Moon decided to call it quits just six weeks after releasing their second album, Wild & Free, in March.

The band - made up of Cook, lead vocalist Nick Santino, guitarist Justin Richards and bassist Eric Halvorsen - are playing a farewell tour and will be in Singapore later this month, their last stop on the Asian leg.

Their final show will be held in Massachusetts on Aug 31.

"I don't know what the rest will be up to after this but we'll still be doing music... and enjoying life," said Cook, who used his downtime last week to attend the wedding of his best friend of 20 years.

It's a tour full of sad goodbyes, but it's not all doom and gloom for A Rocket To The Moon.

The band, signed to US label Fueled By Ramen, cited label woes as a reason for the split.

Cook explained: "We hit a point where we were frustrated with how things were out of our control.

"It's part and parcel of being signed to a major label, a reality we have to accept. We just weren't getting the push we needed.

"Once we decided to break up, it didn't take us a long time to step on it."

A driving force behind the decision was when Wild & Free was only released six months after its expected date, even though it had reportedly been completed in February last year.

Santino, 25, had said in an interview with Alternative Press in May: "It was a real bummer and kind of embarrassing. We were just sitting around at home doing nothing.

"It really took a toll on us, and we were bummed out. We had a great record, and then it didn't really do anything when it did come out."

Still, there are no regrets.

"It's been an exhausting journey but we're content with how things went down. Like every band, we wanted to be as big as possible and we're glad to have reached out to as many people as we possibly could," said Cook.

He makes no promises, but does not rule out the possibility of future shows together.

"We'll miss all the tour experiences, making new best friends, seeing the world and playing songs in general," he said.

In the meantime, he hopes that the farewell tour will be a fitting exit for the quartet and a big thank-you for fans who have supported them over the years.

"We're going to make it a memorable experience for the fans and then walk out happy and proud. We'll just play as many songs as possible until we pass out from exhaustion," Cook said.

FYI
WHAT: One Last Night with a Rocket to the Moon Live in Singapore
WHEN: Aug 27, 7.30pm
WHERE: TAB Singapore
TICKETS: $62 from apesnap.com/event/ARTTM