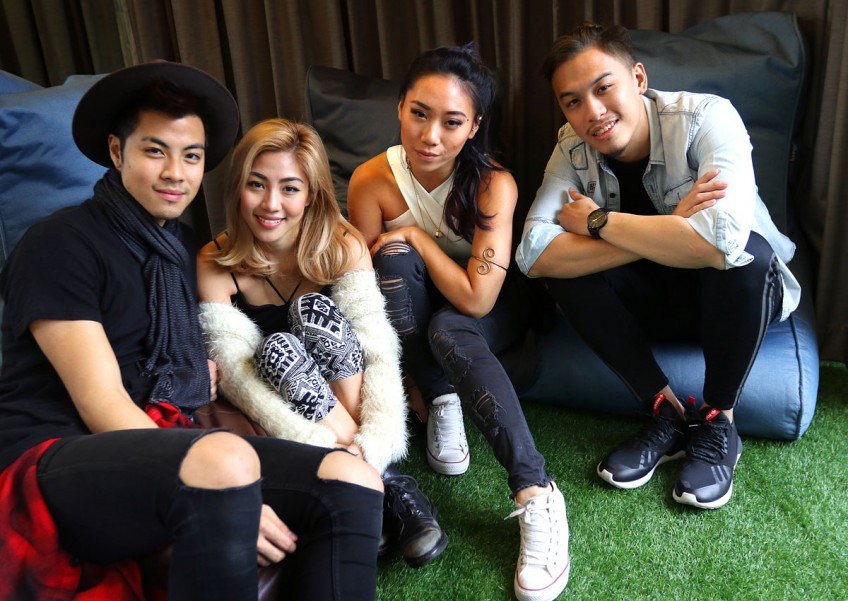 When the music video for The Sam Willows' second single For Love was released this month, it touched the hearts of many fans, some of whom commented on social media that they were moved to tears by its emotional narrative.

It was taken off the local pop-folk quartet's debut album Take Heart, which was recorded in Sweden and will be released on Oct 30.

The MV holds a deeper meaning for Narelle and Benjamin Kheng, who are the siblings of the group.

The music video, about a doting cancer-stricken mother who fights to live for the sake of her young daughter, was inspired by their own mother's four-year battle with the illness.

The housewife, who was diagnosed with Stage 2 breast cancer, died in 2002, when Benjamin and Narelle were 12 and eight years old respectively.

For Love was co-written by all four members, including guitarist-vocalist Jonathan Chua, 25, and the keyboardist-percussionist-vocalist Sandra Tang, 25.

The MV's concept was also a collaborative process and the Khengs' personal experience was part of the brainstorming.

Narelle, 22, told The New Paper yesterday at a press conference held at *SCAPE Gallery: "It's not directly about our lives, but the universal idea of love which everyone can relate to.

"It's the love a parent feels towards a child. It's not necessarily about a sickness, but more about how our parents work and fight so hard for us.

"It's also dedicated to our father whom I'm grateful for every day."

Their father, Mr Kheng Meng Siong, 56, is a manager at a petrochemical firm. He remarried in 2010.

Narelle and Benjamin hold tightly onto the fond memories they have of their beloved late mum.

It was her unwavering strength they admired, something she displayed before her children even in times of great suffering.

Bassist-vocalist Narelle said: "At the age of eight, I never knew that cancer patients felt pain. But cancer hurts, it really hurts. I never found that out until her passing because she never once told me or showed it.

"To me, it was the norm that she was walking around hooked up to an IV drip. That says so much about her love for her child."

For vocalist-guitarist Benjamin, it was his mother's determination to give them a normal life that he cherishes.

"She would wake up earlier and send me for my swimming training. She would be there for all the important moments for as long as she could," said the 25-year-old.

He recalled the day before she died. It was days before his Primary School Leaving Examination and he had returned home from school to find her awake in her room.

She was pacing the room, yelling and crying.

Her last words to him when she was alive were "Ben, get out".

"I went into her room and lay down beside her. Later, she told me to get out and I did. I didn't know then, but she must have known at that point in time that she was going to go," he said.

Naturally, the Khengs were emotional and cried when they viewed the completed video.

"We must have used half a roll of toilet paper," Benjamin joked.

For Love has received praise from fans and garnered over 192,000 views on YouTube.

But the most meaningful feedback came from their father, who told them that "their mother would have been proud and loved it".

"My dad is one of our biggest critics. To get praise from him is one of the biggest rewards for what we do," said Benjamin.

The Sam Willows, who formed in 2012, have been enjoying success ahead of Take Heart's release.

The album's first single of the same name, which was released in May, received over one million streams on Spotify and peaked at No. 1 on iTunes and Spotify charts across Asia. Next is an Asian promotional tour.

This article was first published on October 23, 2015.
Get The New Paper for more stories.