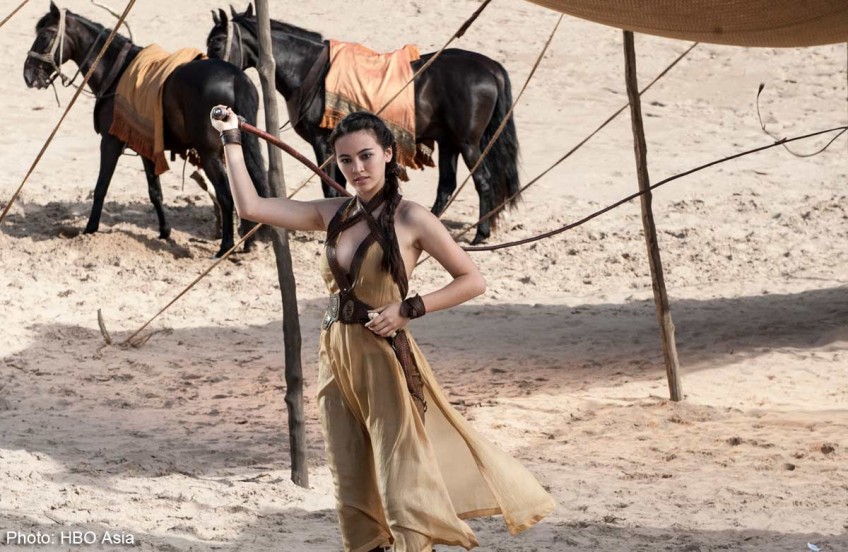 "By the end of my training, my trainer was getting toilet rolls and throwing them up and I could hit them out of the air." Actress Jessica Henwick on learning to use the bullwhip for her role in Game of Thrones.

Singaporean-British actress Jessica Henwick was utterly starstruck when she first arrived on set as a new recruit to Game Of Thrones.

"It was embarrassing. I met Nikolaj Coster- Waldau for this first time and, honestly, I looked like a donkey," she recalls.

She and the Danish star - who plays the morally ambiguous heart-throb Jaime Lannister - were walking on the set of a large ship. "He was like, 'What do you think?' and I said, 'Yes, I'm so cool.' What I meant to say was, 'It is so cool.' Nikolaj just kind of faltered and was like, 'Okay...' That was so embarrassing."

Henwick, 22, who has a Singaporean-Chinese mother and British father, grew up in England a fan of the popular fantasy series, reading Thrones creator George R.R. Martin's novels and devouring each season of the show.

"And my dad is a massive fan," she adds. "He is a writer as well. He really looks up to George Martin and was really excited for me.

"My mum kind of doesn't know what Games Of Thrones is. She is really confused between Games Of Thrones and another job I have done and she always mixes up the titles when she tells people. She really doesn't get it."

Her mother will no doubt learn quickly when Season 5 premieres. Henwick enters the fray as Nymeria, one of the Sand Snakes and a whip- wielding warrior from the southern kingdom of Dorne.

She and two of her seven sisters are hoping to cause chaos in the land of Westeros as they bid to avenge their father's death.

"I had done martial arts for a couple of years on and off, so that really helped," Henwick says, referring to her breakthrough role in Spirit Warriors, a 2009 BBC children's adventure series, the first British TV drama series to have a predominantly East Asian cast.

"I started martial arts for my role on that series. I learnt wushu, which is actually the fighting style of one of my character's sisters in Game Of Thrones. But it helped, as did my dance training. It all helps."

The actress says one of the most memorable parts of her training regimen came during a stint in Portstewart in Northern Ireland when the Sand Snakes were filming their first scene in Episode 4 (which features in the Season 5 trailer).

"We have these great shoes, but they were just sinking into the sand and we were trying to do our fight scene. We were falling over, it was raining and it was embarrassing," she says with a laugh.

"There were fans taking pictures, the crew were moving lorries and there were these porta-potties behind us. I really hope that video never surfaces because we embarrassed ourselves."

For all her teething troubles, Henwick is now something of an expert with the bullwhip, just like adventurer Indiana Jones.

"I've enjoyed the Indy comparisons and I have now got the whip at home," she says, beaming.

Henwick says she feels blessed to play a strong female character such as Nymeria.

"It is really hard for female actors to find a character that is not just reacting to the male characters, the girlfriend, the daughter, the sister, the wife. So to find these three strong women who are working together is so rare."

These are exciting times for Henwick.

After breaking through with Spirit Warriors, she made her British theatre debut in 2013 with Running On The Cracks, based on the book by Julia Donaldson, for which she earned rave reviews from stage critics from The Times and The Guardian.

She is also said to have joined the cast of Star Wars: Episode VII - The Force Awakens, but she is coy about this.

"What's Star Wars?" she says with a laugh. "It has been a very good year for me and I have been very lucky with Game Of Thrones."