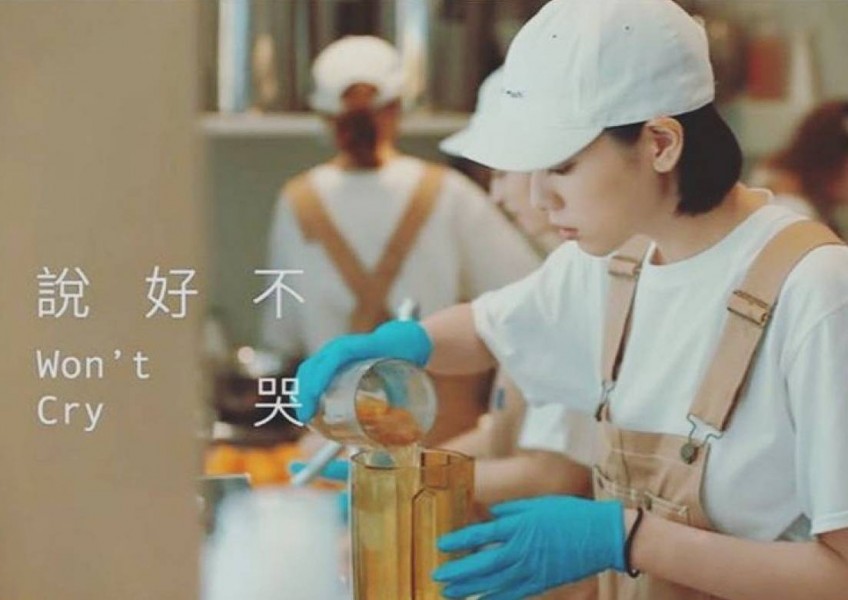 Scalpers have pounced on a pop-up bubble tea shop in Shanghai featured in a hit Mandopop music video, reselling the drinks for many times their retail price.

Annoyed fans of Taiwanese pop star Jay Chou complained on social media that the scalpers swamped the shop on the Bund soon after it opened on Tuesday and were charging up to 300 yuan (S$58) each for drinks selling inside for 13-32 yuan ($2.50 to $6.20).

The tea shop was the backdrop for Chou's latest single Won't Cry, which broke domestic music streaming records when it was released on Monday.

The song topped the charts in mainland China, Hong Kong and Taiwan, and tells the story of a low-paid milk tea shop worker who works extra hours to buy an expensive camera for her aspiring photographer boyfriend.

Named Machi Machi, the pop-up store will be open for eight days only, and sell just 200 cups of tea per day, with drinks limited to one per person.

Several dozen middle-aged men were filmed queueing for several blocks near the store when it opened for the first time at noon on Tuesday, online news outlet ThePaper.cn reported on Wednesday.

Some scalpers - called "yellow cattle" in Mandarin - even charged fans 50 yuan to take a selfie with a bottle of the store's branded milk tea.

"In the morning I passed by and there were quite a lot of yellow cattle there already. I chatted with them and they said that about 300 people from their group were arriving today. The shop clearly opens at noon but they were already queueing up from the early morning," one user wrote on the popular restaurant review app Dazhong Dianping.

"Jay Chou's 'Machi' milk tea store had a busy opening, the yellow cattle selling two cups for 600 yuan. If you had this kind of money you could eat anything," one user wrote on WeChat.

Signs prohibiting "yellow cattle" were displayed near the entrance of the shop, China Youth Daily reported on Friday.

The shop also forced customers to open their drink before leaving to prevent reselling and police officers patrolled the entrance to shoo away loiterers, the report said.

A Shanghai Huangpu district police officer was quoted as saying that the rules had effectively limited the activities of the scalpers.

All the bubble tea recipes in China turn up online, but will brands bite back?

"Never buy from the yellow cattle, because the shop has a rule that you must drink one sip before you leave the premises. The yellow cattle were stunned. Due to slow sales, they could only take selfies with the bottles," another reviewer on Dazhong Dianping wrote.

"So if you bought one off the yellow cattle, it's very likely they've already had a drink from it. If the drink bottle still looks full, they probably drank from it and then added water to top it off, or they might even have filled one of the empty bottles with some other liquid!"

Scalpers were also common as the Hey Tea chain of bubble tea stores started opening in major cities across China in recent years.

Customers would pay scalpers to wait in line to buy them a drink, with some in Shanghai forced to wait up to five hours in 2017.

Chou is known for his love of bubble tea, which he frequently posts about on social media.

While 2 million copies of the song were sold in 25 minutes on Monday, the video was criticised online for glorifying the stereotype of the subservient woman sacrificing herself for her man.

"After all these years, Jay Chou's new music video shows that some men still dream of a world where a beautiful woman willingly works herself to the bone to support your dream," Deng Anqing, a fiction writer, wrote on a public social media post.