A promotional poster for Seventeen’s 2022 “Be the Sun” world tour. The group’s recent concerts in the US show how the 13 members have grown.

K-pop boy band Seventeen are performing for fans for the first time in two years with their Be the Sun world tour, bringing their typical high-energy, precisely synchronised dances and stand-out vocals to stages across the globe.

The thirteen members of Seventeen kicked off the tour in Seoul in June before heading to North America, where they received a warm welcome from their fans – known collectively as Carats – who had watched them from afar for two years.

The final date of their North American leg on September 6 – at New Jersey's Prudential Center – was at the same venue that they performed their first Stateside concert, at a Kcon event back in 2016.

After attending two US shows it was clear to me that the time apart has created an even greater Seventeen, and that absence had truly made the heart grow fonder.

The members were clearly happy at their return to more or less a full line-up (some members did have to sit out dates of the tour due to Covid-19) and thrilled that they could perform to fans in increasingly larger venues as their audience sizes have grown.

The follow-up to their Ode to You world tour, which was cut short in 2020, Be the Sun showed a more grown-up, levelled-up Seventeen, with stage sets and lighting effects creating dynamic environments, and each song have its own artistic presence.

From the first song (this year's single Hot) to the last (their now iconic "never-ending" rendition of 2016 hit Aju Nice) there was a great connection between the audience and the stars, with the group regularly leading the crowd in a two-clap "Be the sun!" chant and addressing them regularly throughout performances. 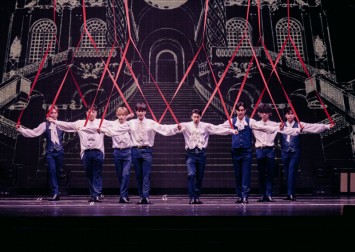 The shared experience culminated in a segment at the end where fans got to interact with Seventeen – either by singing along with them (with some fans dressed in costumes evoking the band and Carats' inside jokes) or having their handmade signs spotlighted on the big screens, leaving the whole arena roaring with excitement.

They have plans to be back, and at the end of their New Jersey show, the group's leading producer-songwriter, Woozi, assured fans a new album is in the works.

Soon after the US leg of the tour ended, an emotion-filled video of the band singing drunkenly for a popular South Korean YouTube channel was released.

A particularly viral clip showed Woozi drunkenly crying about writing a song for fans and the group's members, expressing his earnestness and the band's bond with one another and Carats.

This same passion and drive was evident from all members throughout the concerts, showing why Seventeen are one of the most popular boy bands around.