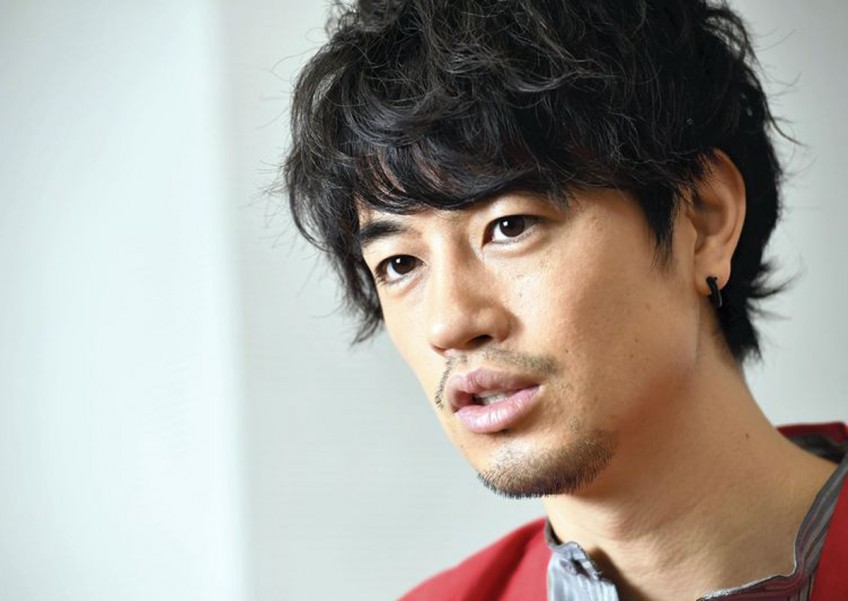 With his somewhat shadowy looks and soft, bass voice, Takumi Saito certainly has no match these days as "the sexiest actor."

The 35-year-old's breakout role came in the 2014 serial TV drama "Hirugao," in which he portrayed a high school teacher who is consumed with love in reciprocal infidelity.

A film sequel to the drama, "Hirugao: Love Affairs in the Afternoon," is now showing, with Saito portraying the man who reignites his forbidden passion with the same woman, played by Aya Ueto.

On the other hand, Saito can switch back and forth between being the handsome man in "Hirugao," and displaying his humorous nature, evidenced by his work in a variety show, in which he presented comedian-like performances that provided a happy surprise to viewers.

The drama, which evoked massive viewer response when broadcast on the Fuji TV network, depicts the affair between homemaker Sawa and high school biology teacher Yuichiro Kitano when the heroine's husband is out for work during the day.

The two eventually break up when their clandestine love is discovered.

The film catches up with them three years later, Sawa living a modest life in a seaside town she moved to after getting divorced and working at a restaurant as an apprentice.

One day, she learns Kitano, who now teaches part-time at a university, will visit the town to give a lecture on fireflies. While hesitant to go at first, Sawa eventually finds herself at the site of the lecture, and the two fall back into their relationship.

Sawa and Kitano go on a date near a stream where there are fireflies and vow to be together.

However, what follows is a tragic consequence.

"I don't approve [of their relationship], but people are often fascinated by things that are immoral," Saito said.

"You can't resist it once the switch goes on in your heart, even though you know you might hurt someone by doing so."

At first sight, Saito's character does not have a sexy look at all, thanks to his plain-looking hairstyle and everyday glasses.

He just devotes himself to studying the ecology of insects.

However, after encountering Sawa, Kitano displays a quiet but appealing aura that comes across in his actions and his looks.

His sensual air generates a thrill by radiating not directly but subtly - just like a ripe fruit falls off a tree and gradually emits its sweet aroma.

Saito explained his cool-headed analysis of his character as a man who "lived while curbing his desires."

"At the same time, however, he might have hoped to release his suppressed feelings," the actor said.

"Every human has conflicting emotions. In fact, we have various facets, you know."

I came up with a question: You now have an established persona as a sexy actor, but don't you want to shed that image?

"This is the first standing I have reached at all after many years of drifting," Saito said.

"I never had a particular image before, so I just appreciate it, although I think, 'No, I'm not actually that way.'"

The Tokyo native dreamed of becoming an actor since he was very young, when his father worked in film production.

He started out his career as a model for fashion magazines while in high school.

He made his acting debut at about 20 as part of the main cast in a film.

Despite this smooth start, Saito toiled with a low profile the following decade, during which he failed a number of auditions and felt as if he were running through a dark, long tunnel.

He was deeply frustrated when friends said such things as, "At least you're still acting."

It was only recently that he achieved fame enough to receive many offers.

That's why Saito said he aims to reinvent himself as an actor.

"How should I keep recreating my 'sexy' image? I have to try something completely different from what I am," he said.

"I'm not afraid of embarrassing myself. I just want to move forward, and even kick away a foothold I've gained."

At the end of last year, Saito took on a new challenge: In a TV variety show, he did a perfect imitation of comedian Sunshine Ikezaki's popular routine in a performance that veered far away from his sexy image. Following the broadcast, fans tweeted comments of both amazement and praise.

"Some people may say actors don't have to go that far," Saito said. "Of course, I want to be recognised for my acting. However, I wasn't wanted as an actor for a long time, so I just went all out to do what I was expected to do, thinking such an attitude would help me get my next time at bat.

"So all of that just happened in the end," he said chuckling.

While in high school, Saito watched everything on the shelves of the rental video shop in his neighborhood.

The actor is now a known film enthusiast, posting comments on films he saw on his official blog (http://takuming.seesaa.net/) almost every day.

Saito started directing short films in 2012, while his first feature-length film, "blank13," will be released in February.

The film, based on a real story, depicts a family whose breadwinner went missing 13 years prior.

Following his death, family members, while still feeling bitterness toward him, learn the surprising truth at his funeral through accounts by those attending.

The protagonist, the man's son, is played by Issey Takahashi, while Saito himself plays the character's older brother.

"Each time I direct a film, I say to myself, 'This will be my last,'" Saito said.

"Many actors overseas frankly go back and forth between acting and directing. I believe we should be more flexible."