We all want to put our best foot forward in our work and contribute as much as we can. We're encouraged to speak up, be innovative, and suggest fresh and creative ideas.

But when former local celebrity Sharon Au shared her ideas passionately at work, she was "scolded for it". That was what led to her decision to "dramatically" resign from Mediacorp in 2018.

In the latest episode of the meWATCH talkshow Hear U Out, the 45-year-old recounted the day she resigned from the broadcasting company without having first secured a new job.

This was after she had completed her overseas studies and was serving her bond with the company on the corporate end.

She said: "I forgot myself in a meeting and started sharing my ideas excitedly and I got told off for it. Perhaps I was feeling too vulnerable back then. I remember crying after the meeting as I closed my laptop and packed up.

"We were supposed to go back to work after the meeting but I don't know why, I just walked away and couldn't stop, and I ended up going home and crying on the way back. I didn't know what I was doing. I got home, switched on my laptop, and typed out my resignation letter."

Sharon didn't go into details about the meeting, including its purpose or who was present, but the last positions she held prior to her departure were as the publisher for Elle Singapore and the lead of styleXstyle.com. Back in 2018, both Sharon and Mediacorp released statements announcing her resignation.

When contacted by AsiaOne regarding Sharon's comments, a Mediacorp spokesperson said they were "unable to comment on the personal decision made by Sharon Au". 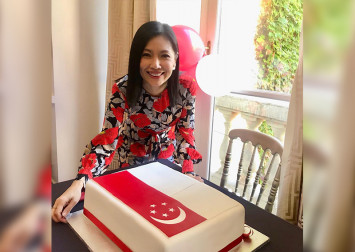 After her resignation, she moved to Paris because she wanted to start afresh but no one there would hire her. She was jobless for three months and even thought of being a waitress at the Italian restaurant near her apartment.

Then, a former Mediacorp chairman invited her out to dinner when he was in Paris for business. Sharon said that he had seen her projects and was impressed by them.

She added: "While we were eating, he asked me how work was, and I told him I didn't have a job and couldn't find one. He was so shocked to know that because to him, I was someone very capable and talented, and someone he admired."

One phone call later, Sharon clinched a job at a private equity firm and she has climbed her way up to being an investment director with clients under her.

"Life is all about connections. You must grab on to the connections you make and it helps to have a benefactor," Sharon said.

ALSO READ: Sharon Au: People thought I was a traitor in the media war but I'm actually the big winner