Hundreds of fans from across the country were present while the casket of Jonghyun -- whose real name is Kim Jong-hyun -- was carried out.

Onew, Key, Taemin and members of Super Junior were pallbearers, while Minho and Jonghyun's sister walked ahead of the procession holding his photo.

Read Also
You worked hard, Jonghyun, you did well 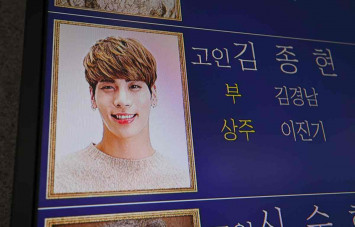 The private funeral started around 8 a.m. It was attended by Jonghyun's family, as well as officials and artists of S.M. Entertainment, including Girls' Generation and EXO.

Jonghyun was found unconscious at a rented studio apartment in Seoul on Monday. He was pronounced dead shortly after being sent to a hospital. Investigators ruled it a suicide.