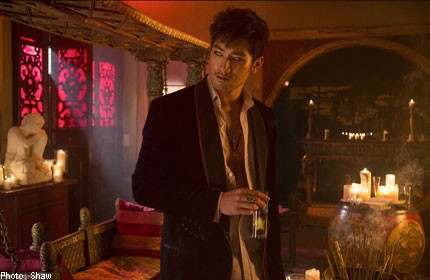 Fantasy Thriller: Taiwanese actor Godfrey Gao in The Mortal Instruments: City Of Bones. Gao says he was open to anything that was thrown at him on the film set to fully immerse himself in his sexual-deviant role.

Taiwanese model-turned-actor Godfrey Gao may have got his first Hollywood break after being cast in upcoming fantasy thriller The Mortal Instruments: City Of Bones.

But for his virgin foray into Tinseltown, the Canada-raised heart-throb had to morph into a 300-year-old warlock who likes having sex with men and women.

To embrace the sexual deviant he was playing on-screen, Gao was open to anything that was thrown at him on the film set.

For starters, his make-up routine took three hours each day before he was camera ready.

Glitter, nail polish, piercings, tattoos and tons of eyeshadow were just some of the "funky stuff" he had to put on.

Then there was a scene he had to shoot in icy temperatures - with only his boxers on.

But freezing his behind off for The Mortal Instruments, which opens here on Aug 22, was completely worth it.

Gao, 28, told The New Paper over the phone from Taiwan: "It was around 1 deg C and we were filming in Toronto last September.

"I really wanted to cry, I was freezing. Being that naked, I caught a cold eventually.

"But the crew did take care of me. They kept offering me hot chocolate, tea, chocolate buns and candies. That made the entire experience bearable."

It tells the story of a teenager (Lily Collins) whose life dramatically changes after she witnesses a murder at a club.

She finds out that she, like her mother (Lena Headey), is a Shadowhunter - a breed of half-angel, half-human warriors with mind-blowing powers and whose mission is to protect the world from evil forces.

In a race against time to save her mother, she gets entangled in an alternate reality filled with demons, warlords, vampires, werewolves and other deadly creatures.

Gao said when he got the part, he had no idea "what they were going to do to me".

After reeling from happiness at scoring his first Hollywood role, reality sank in that playing the sexy Magnus Bane wasn't going to be a walk in the park.

"At first I didn't like the idea of how long it took for me to get into the character, there was just so much spiky, funky and flashy stuff to be put on.

"They had to glue piercings on me, paint on fake tattoos, draw my eyes with lots of eyeliner and eyeshadow, but I heard that it turned out great.

"(Netizens have) said I looked like a rock star, so it's all good."

To fight the signs of ageing because Bane can't die or look older - thus explaining why he's 300 - Gao took the initiative to apply mask on his face daily.

The SK-II ambassador revealed that as a spokesman for the popular skincare brand, his face masks are sponsored.

He said: "I didn't use to have good skin as I would get breakouts often and had a lot of pimples.

"My forehead and nose were the most problematic, more so if I was under stress during filming.

"When one puts on that much make-up every day, it also takes a toll on the skin.

"My face is my money maker, especially as Magnus Bane who can't age physically.

"I think it's important that men have radiant, moisturised skin."

Female fans who have been swooning online over Gao's transformation into Bane will be happy to hear that he is "very single".

Gao said he is shy and reserved, and is looking for a girl who can bring him out of his shell.

He said: "I like women with long hair and a big smile.

"If she's sincere, down-to-earth and can joke with me on our first meeting, that would be great."