Simu Liu on the challenges of being Marvel's first Asian superhero

When Simu Liu won the leading part in Marvel’s latest extravaganza, Shang-Chi and the Legend of the Ten Rings , the significance was not lost on him. “It really is the biggest role I’ve ever had by a long shot,” he says.

Previously best known for the Canadian sitcom Kim’s Convenience , the Chinese-born Liu is all too aware that he’s been catapulted onto Hollywood’s A-list. More notably, he’s the first Asian to play a titular Marvel superhero. “It is the realisation of a childhood dream,” he adds, “and truly the opportunity of a lifetime.”

Inspired by Marvel’s 1973 comic series by Steve Englehart and Jim Starlin, Shang-Chi (played by Liu) spent his youth learning to kill, thanks to his ruthless father (Tony Leung Chiu-wai ). But after fleeing his homeland, he’s now living in San Francisco under the name “Shaun”, working as a parking valet.

The story really kicks into gear when Shaun and his friend Katy (Awkwafina ) are accosted by members of his father’s gang, the Ten Rings, who track down Shang-Chi to bring him back to his father. Only then does he reveal to Katy his remarkable fighting skills.

As action-packed as Shang-Chi is, it’s the “little moments” that speak to the Asian immigrant experience that really excited Liu – like Shaun taking his shoes off as he enters Katy’s apartment.

“That’s something that resonates very deeply with all of us who grew up in Asian immigrant families, because we all know, the house is a shoe-free zone, and you got to keep those floors clean!” Then there is a brief glimpse of Shaun showing respect to his elders. “That’s always been a part of the way that I was raised. And it’s something that’s very important to me.”

Born in Harbin, the capital of China’s northernmost province, Heilongjiang, Liu was brought up by his grandparents when he was very young, while his parents were studying at Ontario’s Queen’s Univer­sity. At the age of five, he was spirited away by his father to Mississauga, a suburb of Toronto, where he spent the rest of his childhood.

It’s why he related to the “duality” of Shang-Chi/Shaun’s existence. “[He has] this one side of him … where he experienced one piece of his upbringing, and then has to balance that with a whole different side of his life.”

Shang-Chi is a film about achieving your potential, and the 32-year-old Liu understands that notion only too well. “I think a big part of that journey for me was making the decision to pursue acting in the beginning because I didn’t go to school for it. I went to school for accounting and finance.”

After college, he found a job at major accounting firm Deloitte, but quickly realised that a life crunching numbers was not for him. “It was under that circumstance that I finally made the decision to try something different. And that’s how I wound up on the set of a movie for the very first time as an extra.”

ALSO READ: Was Simu Liu hired for Shang-Chi because of his tweet? Marvel finally responds

He played a tech nerd on Taken , the TV version of the Liam Neeson revenge movie franchise, and in 2016, won his role in Kim’s Convenience, a show that’s taken him through five seasons. Yet there was always the sense that he wanted something bigger.

“In my entire life, I’d wondered why there were no superheroes out there that looked like me,” he says.

In 2018, Liu sent out a tweet suggesting Marvel consider casting him for the role of Shang-Chi. In fact, it wasn’t the first broadside aimed at the studio; three years earlier he tweeted after watching Avengers: Age of Ultron . “I was feeling a little bit down that again I wasn’t represented, but Twitter has been a great place for me to air my thoughts. Probably too much!”

Still, in the fight for diversity and representation, Shang-Chi could be a groundbreaker. “I think when you have an Asian-American screenwriter [Dave Callaham] and an Asian-American director [Destin Daniel Creton] and a predominantly Asian cast, you have this commitment to tell authentic stories that accurately represent the characters and their experiences.”

Among the cast, Liu got the chance to work with two of the greats of Asian cinema – Tony Leung and Michelle Yeoh, who plays Shang-Chi’s aunt.

The Hong Kong-born Leung previously took the lead in The Grandmaster , while Yeoh co-starred in Crouching Tiger, Hidden Dragon , two of the great martial arts movies of the past 20 years. Both made Liu feel right at home.

“Michelle gave me a big hug and was like, ‘We’re gonna have a lot of fun.’ And that just meant the world to me, seeing her just so comfortable and in her element, but also just so free-spirited and friendly. And Tony as well was just such a gentle and soft-spoken guy on top of being an incredible performer and incredible talent,” says Liu.

Read Also
Simu Liu is fiercely passionate about his role as Shang-Chi, but is it enough? 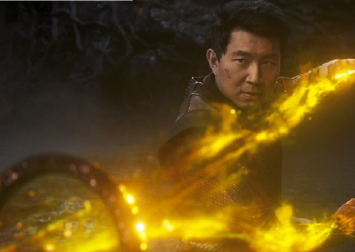 While Liu began his career in earnest working as a stunt performer on the superhero TV show Heroes Reborn , did he have martial arts experience to bring to Shang-Chi?

“I definitely dabbled and had done a number of stunt jobs in which I was doing fighting. Was I a Jackie Chan -level martial arts master? Absolutely not! Not by any stretch of the imagination. I’m an actor. I’m a performer.” For Shang-Chi, he trained with the late Brad Allen and his stunt team for months, five days a week for hours every day.

“I feel like it’s a bit of a misconception that all actors have to be expert martial artists if they’re Asian,” he adds. “I kind of feel that expectation a little bit in the world and I can feel the world maybe bristling at this idea that an Asian actor can be taking on this role, but not be a martial arts expert.

“But my career has been all about breaking the mould and redefining expectations and shattering assumptions. And I think what better way to do that than to introduce the world to an actor, and a performer, rather than someone who’s just purely a martial artist.”

Now he’s ready to bring Shang-Chi to the world, all too aware of what it’s going to mean to generations below him. “I look forward to being able to share this movie with not only Asian children all over the world, but all children,” he says. “It’s a global thing. And it’s meant to be a bridge between cultures and to bring the world together.”

It’s a grand statement, but somehow you feel Shang-Chi can shoulder this burden.