Sing a song of Singapore 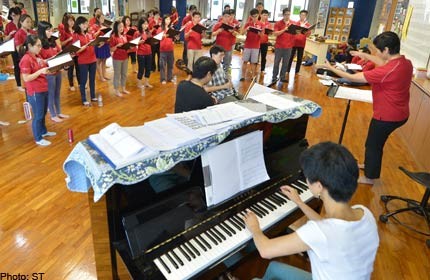 The SYC Ensemble Singers (formerly known as the Singapore Youth Choir) during a practice session with conductor Jennifer Tham.

SINGAPORE - The SYC Ensemble Singers may be one of Singapore's oldest choirs but it is known to prefer new music from contemporary composers.

As a result, the 44-strong ensemble often gets gifts of song in the mail.

Such presents and specially commissioned melodies are featured in the ensemble's 49th anniversary concerts on Thursday and Sunday at the Esplanade Recital Studio.

Titled We Are Singapore, the concerts feature unusual works such as Birth And Death, which involves the chorus rhythmically bashing rocks together.

The piece by Singapore composer Hoh Chung Shih was originally written for the choir's 40th anniversary in 2004.

The SYC Ensemble Singers' artistic director Jennifer Tham, 51, says: "This year is like a retrospective because we have new pieces written for our 50th anniversary next year."

The choir usually performs only two concerts a year but is planning many more over the next 16 months in the lead-up to its next anniversary.

First will be a performance in December under the baton of Philippine guest conductor Jonathan Velasco.

The repertoire for the two concerts this month includes gifts from overseas composers such as Italian artist Lorenzo Donati, but mostly reads like a who's who list of Singaporean voices.

Leong's work, Nightmare, is Singapore poetry set to music and based on the 1977 verses by Angeline Yap, while Dr Goh's The Happiness Of Fish is inspired by a tale of Chinese philosopher Zhuangzi.

"We know we're going in the right direction when composers come up and say: 'Before I heard you, I never thought of writing for a choir but now I want to write for you'," says Tham.

She started singing in the ensemble in 1981 and began conducting it in 1986.

The SYC Ensemble Singers began in 1964 as an amateur choral group for students.

It was renamed the Singapore Youth Choir and won laurels here and overseas.

Highlights of the group's career include multiple wins at Welsh choir competition, the Llangollen International Musical Eisteddfod, and doing radio broadcasts for Germany and Sweden on Asian choral music in the 1990s.

In 2004, the choir reinvented itself as a contemporary ensemble under Tham's baton.

There are currently 44 members, ranging from teenagers to 50somethings.

All of them have to audition for a spot and the accolades continue, including a 2010 win in Arezzo, Italy, at the 58 Concorso Polifonico Internazionale festival.

The chance to sing and learn new things every year attracts members, in spite of twice-weekly practice sessions that last four hours each.

Real estate agent Jean Teo, 28, has been with the choir for about three years.

She took a year-long break because of work commitments but returned to the group as soon as she could.

"I missed singing with everyone," she says.

Karen Cheong, 42, who works in the food and retail industry, has been an alto with the choir for 24 years. Like many other members, she was looking for people to sing with after junior college.

"Why have I stayed? The music we do is so diverse," she says. "And then, there are these guys. It's no fun singing alone."