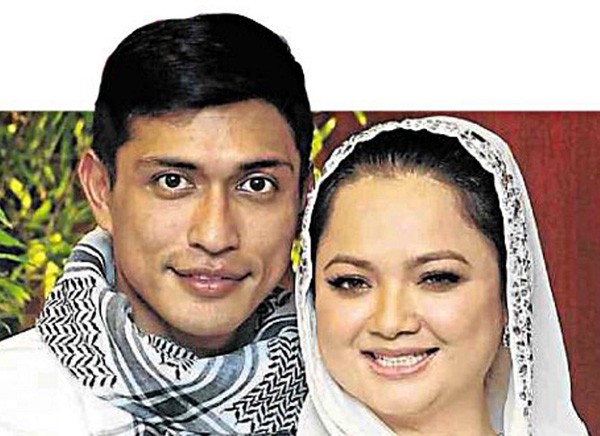 His marriage has become a red-hot topic over the weekend - but no one is talking about his wife of a decade.

At least, not directly.

Instead, both curious netizens and fans of Singaporean actor Adi Putra are more interested in unconfirmed news of a secret second wife that the Kuala Lumpur-based star allegedly took in a small closed-door wedding ceremony recently.

But is there any truth to this?

Yesterday afternoon, both Adi, 35, and his wife Aida Yusof, 41, posted a happy photo of themselves (right) on their respective Instagram accounts.

The photo, as if to dispel the gossip, was simply captioned with a smiley.

Some voiced their support and joy for the couple, while others questioned his true intention for uploading the photo.

Other dissenters mocked him for being "unfaithful" and making the wrong move.

The shocking rumour of his alleged second marriage rocked the Internet and was backed by viral photos obtained by Malaysian media.

Malaysian media also ran a third photo of him kissing her forehead.

What added to the speculation was a note posted by Adi himself on his Instagram page last Saturday, hastily cancelling a Hari Raya and fifth anniversary gathering with his fan club, 1HotLovers, last Sunday.

He apologised but did not state the reason.

Malaysian news site Utusan Online identified Adi's rumoured new bride as Norshahida Zolkafly and reported that she works in the corporate department of a government agency.

It also reported that the pair have a joint business venture which started over a year ago.

Adi, whose real name is Mohamed Hadi Putera Halim, tied the knot with Madam Aida in 2006.

They have a four-year-old daughter.

KEPT IN THE DARK

When contacted by Utusan Online last weekend, Madam Aida, who is also based in Kuala Lumpur, refused to elaborate on the situation.

"Please give me some space for now. I hope all parties can understand the situation at hand," she said simply.

Malaysian media ran reports that she was kept in the dark about Adi's new marriage.

Prior to this incident, the couple's marriage hit the rocks in 2012 when he filed for a divorce but retracted it shortly after.

In an interview that year following the drama, he told The New Paper that his marriage was "getting good and is better than before".

The following year, his name was dragged through the mud when he was accused of exchanging lewd photos and messages with an unknown married woman.

Again, he told TNP that he and his wife were "fine" and that she was "calm and cool because she knows me".

TNP was unable to reach Adi, who has not directly addressed his latest scandal publicly.

However, on the day Astro Gempak received photos of the ceremony, it also received screenshots of a Facebook status allegedly written by her ex-husband.

The long message made a reference to a woman who chose to follow her heart after she found a man she felt could guide her, without giving due consideration to her own young child.

Fans and detractors did not hold back with their comments.

Twitter user‏@AsyEynaz wrote: "Adi putra kawin lain ye ('Did Adi remarry?' in Malay)? I thought he (is) such a loyal husband to his wife."

But @AhBee_ADP pledged his support for Adi, writing: "With all the rumours I will still support you."

A Malaysia Gazette commentary even asked what the fuss was about since Muslim men are allowed to marry up to four wives.

It suggested it was better that "Adi get married than have an extra-maritial affair."

This article was first published on July 19, 2016.
Get The New Paper for more stories.