The singer, whose stage name is Nine9, released the letter with his family's permission, reported Koreaboo.

In a lengthy Instagram post on Tuesday, she wrote: "I was not sure whether I should be posting his will or not, still contemplating in fact, but Jonghyun asked a favour to release his final words if he leaves this world behind. I was really hoping that this day would not come….."

The following is the unofficial English translation of Jonghyun's suicide note in Korean.

I was broken from the inside.

The depression slowly chipped me away, finally devouring me.

I could not beat the negativity.

I hated myself. Even though I tried so hard demanding my memories that kept getting cut off to 'wake up,' all I got in return was silence.

I'd rather stop if I cannot breathe.

I asked who could be responsible for me.

You're the only one.

It is very difficult to actually go through with it.

I've been struggling through the difficulty.

I told myself that it's just me wanting to run away from everything.

It's true. I really did want to run away. 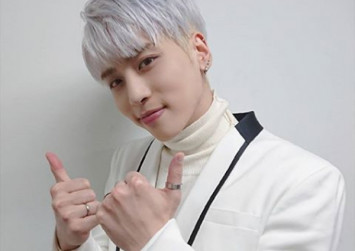 I asked, "Why do I keep on losing my memory?" They said it's due to my personality. I see. It's all my fault.

I wanted someone to notice (my suffering), but no one knew. Of course, they wouldn't. They never met me before.

I asked why people live. Just. Just. They live "just because."

If I ask why people died, they would probably say they couldn't bear it any longer.

Troubling thoughts flooded my head. I never got the chance to learn how to change dull pain into pure joy.

I kept reprimanding myself not to do so.

Why? Why can't I even end my life with my own will?

I tried figuring out the reasons for my pain and suffering.

I already had the answer. I was in pain because of me. It's all my fault that I carry so many imperfections.

Teacher, is this what you wanted to hear?

No. I didn't do anything wrong.

I used to think that it's so easy for doctors to blame your personality for the suffering in their calm voice.

It surprises me how I am feeling this much pain. Those people, who have suffered worse than I, seem to go on living perfectly fine. Those weaker than I am live on as well. I guess not. Among the living, there is no one who is suffering worse and no one who is weaker.

The only answer I got back was "just live nevertheless."

Asking the purpose of life more than one hundred times is not for me. It's for you.

I wanted to do it for me.

How could you ask me to still look for reasons behind my pain? I told you multiple times why I'm suffering. Do I need more reasons to be in pain? More dramatic details in my stories? More stories even?

I told you already. Were you absent-minded when I told you? Things you can bear and even come above do not leave scars.

It wasn't my responsibility to go against the world.

It wasn't my path to become world-famous.

That's why they say it's hard to go against the world and to become famous. Why did I choose this path? It's quite funny now that I think about it.

It's a miracle that I endured through it all this time.

What more can I say. Just tell me "good job."

You did great. Tell me I suffered enough.

Even though you can't laugh right now, just don't send me off blaming me.

You suffered a great deal.