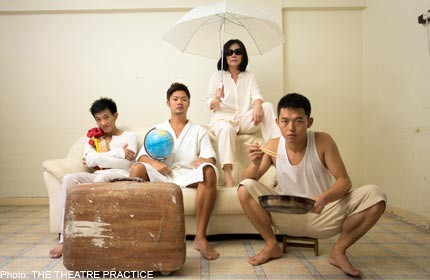 Wanderer-Seeker: A Trek Around My Room by The Theatre Practice will be staged as part of the Chinese Theatre Festival 2013.

SINGAPORE - Home-grown theatre group The Theatre Practice has hit on a winning formula with its Chinese Theatre Festival.

The annual series of Chinese language plays, launched in 2011 to sell-out success, is back with a varied bill that aims to appeal to a diverse audience and spotlight small- or medium- sized Chinese language works which do not usually receive top billing here.

Tickets to the upcoming shows have been selling fast and some performances are almost sold-out.

The festival took a break last year when the bilingual company focused on commemorating the 10th anniversary of the death of its founder and theatre pioneer Kuo Pao Kun.

It opens next week with La Naissance, a whimsical puppet show by Taiwan's Flying-Group Theatre, which explores topics of birth and beginnings, and is suitable for both young and old.

Another family-friendly production is The Theatre Practice's fresh telling of the story of legendary Chinese war heroine Mulan.

Edgier fare comes in the form of Wanderer-Seeker: A Trek Around My Room.

The modern musing on dealing with the grind of urban life is inspired by writings of the ancient Chinese philosopher Zhuangzi.

The play premieres under The Theatre Practice's new wing, The Practice Lab, which is dedicated to actor training and development, especially in the area of devised theatre.

The range of the festival is also stretched by the new production Threshold (1 Table 2 Chairs Experimental Series).

It comprises three 20-minute plays by three different directors who each offer a distinct take on the topic of thresholds or critical limits, albeit using the same staging of one table and two chairs.

The company's artistic director Kuo Jian Hong, 46, says: "The inspiration for the festival came when we looked at the Chinese language theatre scene here and saw a lack of it in any form and function."

The hungry Chinese theatre-going audience has in turn snapped up tickets.

The two child-friendly performances with a total of 25 shows - more than double the number of Mandarin children's shows in the 2011 festival - are close to sold-out.

Tickets to the more experimental plays are also going fast.

Kuo acknowledges that the Esplanade's annual festival of Chinese arts, Huayi, which began in 2003 and usually lasts a fortnight or so, has put the spotlight on Chinese theatre.

"But with Huayi, the focus on Chinese language theatre is only for a period of time every year and I feel that is not quite enough."

She adds: "At Huayi, the loudest presence is usually the large theatre shows. But in Chinese theatre, there are wonderful projects that are for the small, mid-sized theatre and we want to bring that to the audience."

She believes such smaller shows give directors and artists greater room to experiment, as well as build a closer connection with the audience.

She cites Threshold, with its minimal one-table, two-chairs format as an example.

The staging configuration is borrowed from traditional Chinese opera and it has been popularised in contemporary Chinese theatre by Hong Kong director Danny Yung, who along with other directors have used the simple format to conjure creative permutations.

Of the staging, Kuo says: "It is structured yet totally free, the best combination for inspiring work. It also goes back to the essence of theatre-making, which is kind of scary. You have no security blanket, nothing cosmetic to cover up any blemishes."

She is one of the three directors for Threshold along with Lim Chin Huat, freelance artist and former director of the now-defunct dance company Ecnad, and Liu Xiaoyi, director of The Theatre Practice's The Practice Lab.

Liu, 31, brings the same creative spirit to the process of writing and directing Wanderer-Seeker.

He co-wrote the play with his wife, Huang Suhuai, and they chose to spurn the usual format of dialogue for prose.

He says: "Zhuangzi's text is full of quirky stories, so we wanted to stick to the same style. It is the first time I am approaching a play this way."

The duo came up with 16 pieces of short fiction on peculiar happenings in Singapore, which provided fodder for rehearsals and allowed the actors to further shape the play.

Kuo sums up the festival's diversity: "People may say the programme is greedy for reaching in all directions but we see needs all around us so we want to be diverse in content and have something for everybody."

Where: School of the Arts (Sota) Studio

WANDERER-SEEKER: A TREK AROUND MY ROOM