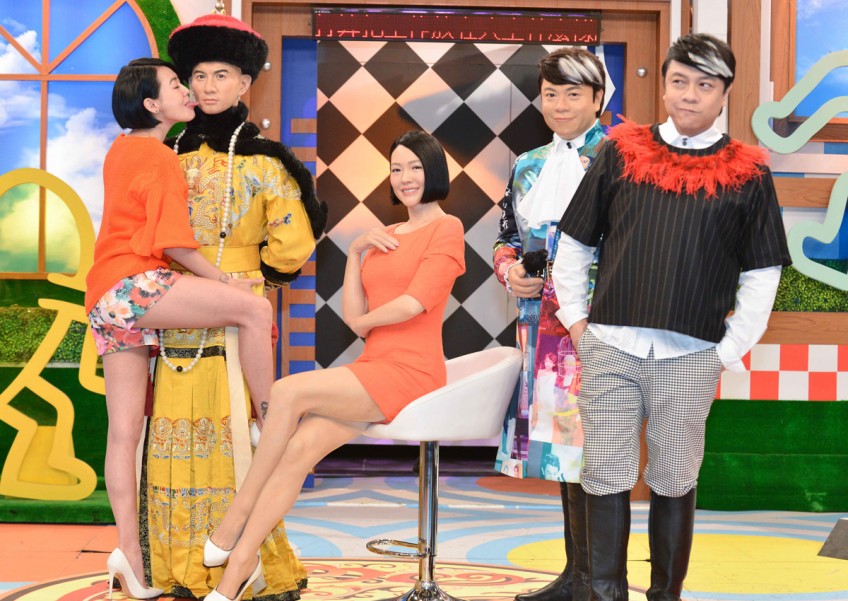 When television host Kevin Tsai called it quits on long-running Taiwanese talk show Mr Con & Ms Csi on Oct 16, it felt like the end of an era.

So says avid viewer Benjamin Tan. "Tsai is the pillar of the show and is irreplaceable. It's like America's Next Top Model without Tyra Banks or The Ellen DeGeneres Show without DeGeneres," says Mr Tan, 27, an assistant sales manager.

Hsu's Facebook post expressed support: "The show is incomplete without Kang-yong brother. So dear, I'll leave together with you."

This spells the imminent end of their almost 12-year journey.

The pair have become synonymous with the show, says the show's producer, Wang Wei-chung, in Taiwanese media reports.

He assured viewers that the series will end on a good note.

The finale will be taped on Nov 25 and will air the week of Dec 22, according to a China Times report.

One hundred celebrities may turn up to bid the show farewell, reported Apple Daily.

Still, Mr Tan laments: "Many people grew up watching the show, like my family and I. I felt sad because the show has been my source of entertainment since my school days."

The show - whose Chinese title is inspired by the two hosts' Chinese names - has recorded close to 3,000 episodes.

Guests ranged from heavyweights in politics and entertainment, such as then Taipei mayor- turned-President Ma Ying-jeou to Taiwanese-American singer Wang Leehom.

The show also featured the man on the street.

Producers tried to keep it fresh by varying the format and topics for the weeknight show.

Episode themes ran the gamut from the usual talk-show setting to getting celebrities to remove their make-up on TV.

The unconventional pairing proved to be the show's winning formula - the razor-tongued livewire Hsu complemented the calm, scholarly Tsai.

Their backgrounds could not be more different. The vivacious Hsu, 37, debuted as part of now-defunct girl duo, Asos, with elder sister Barbie Hsu, 39.

The younger Hsu went on to host, while the elder one concentrated on acting.

Tsai, 53, has a varied portfolio, which includes roles such as host, author, magazine editor and scriptwriter.

On a Chinese talk show, it was revealed that Tsai told producers that his only condition for agreeing to host Mr Con & Ms Csi was if Hsu was his co-host.

Sparks flew between the duo. They wowed critics and shared a Best Variety Show award at the Golden Bell Awards in 2005.

The show struck gold in its native Taiwan and abroad. It has amassed an overseas following in places such as China, Hong Kong and Singapore.

Since it started in 2004, the show has reportedly made NT$2 billion (S$86 million) for media group CtiTV - stemming from fees for advertising, as well as overseas and Internet broadcasting rights.

The show has a firm grip on the top spot during its 10pm slot in Taiwan, according to Apple Daily.

The report also revealed that the show attracted 380,000 viewers a minute in its heyday. However, its ratings have dropped by half in recent times.

Since news of the hosts' departure broke, Apple Daily said that ratings have risen to 220,000 viewers a minute.

The massive China market also took to the talk show. The show hit the mark of 5.3 billion viewers across major Chinese online sites last year, according to a CTI TV news report.

China audiences were hungry for more. The show spun off a series of sold-out concerts in China in 2009.

It is no wonder that the show's impending end has upset its devoted followers. Netizens have started online groups to ask their favourite hosts to stay on.

One Facebook group has urged its more than 37,000 members to leave messages in the hope that the hosts will reconsider their decision.

According to an unofficial poll conducted in the Facebook group, the show's draw lies in the hosts' chemistry and the interaction between the guests and hosts.

Local viewers concur. Radio presenter Yong Shu Hui, 28, says: "It's not so much who the guest is. I watch it for the hosts. They have such great chemistry and lively banter."

Ms Ong Huey Shan, 32, who works as a sales manager in the travel industry, is in awe of the hosts' abilities to draw out a different side of celebrities.

Freelance writer Natalie Pang, 27, says the show offers "one of the most intimate interviews" .

She says: "Celebrities are put at ease because of Tsai's reputation as an intellectual and Hsu's ability to make an awkward moment funny.

It helps that they are usually friends with the celebrities."

The personal connections or A-list status of a guest do not protect him from the hosts' no-holds-barred approach.

Ms Pang recalls an episode where Taiwanese actor Vic Chou appeared on the show after his break-up with actress Barbie Hsu.

She says: "He came to promote a drama series and told Dee not to ask about his relationship, but she did anyway."

The sarcastic and nosy Hsu is a softie at heart.

"I'll be filming Mr Con & Ms Csi tomorrow, but I can't bear to sleep. Because once I wake up to film this episode, it means that I'm closer to the end."

There is a glimmer of hope for fans of the wacky duo. Word has it that Tsai wants to focus on preparing for his movie, which he has penned the script for and intends to direct.

He has said that he will invite Hsu to appear in it.

For now, some viewers are getting ready to bid farewell.

Ms Yong says: "I'm sad to see them go. But I can't be selfish and ask them to keep hosting a show that they've done for 12 years. They probably want to try other things. It's time to say goodbye to an old friend."