#SongSongCouple's timeline: What went on before the big announcement 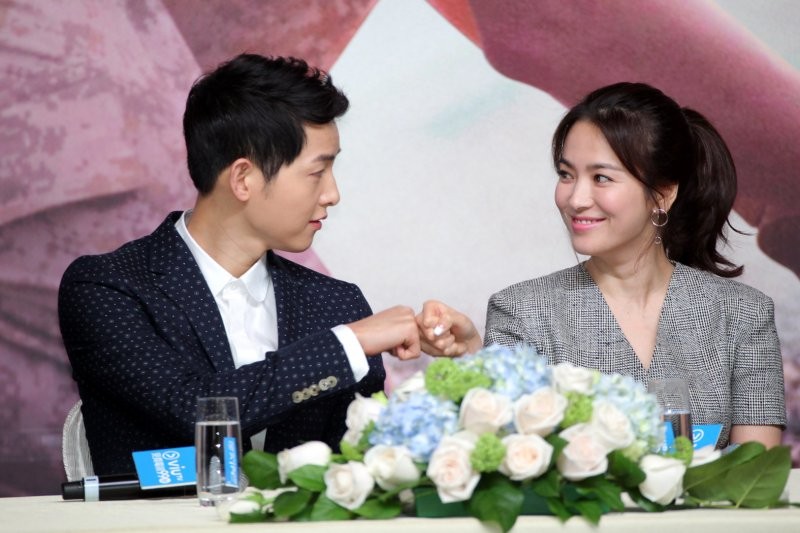 In case you missed it, the stars of "Descendants of the Sun", Song Joong-ki and Song Hye-kyo just confirmed their wedding plans for October 31.

Fans of the two, tagged as the #SongSongCouple, immediately turned to the internet to express their mixed reactions. Some were shocked and some turned out to be already expecting the announcement, especially after recents news about the two being seen together.

Let's also consider everything that happened before, during and after their work together in "Descendants of the Sun".

Let's look back at some of the exciting news and rumours that all led to today's big announcement:

February 2016: Their drama series "Descendants of the Sun" started airing in Korea and it received immense popularity both locally and internationally. The drama aired until April of the same year.

December 2016: The two arrived together at the 2016 KBS Drama Awards where they shared the top award for that year. They also won Asia's Best Couple Award, which was voted for by the public overseas, particularly those in Southeast Asia.

During their speech at the awards night, Song Joong-ki tearfully showed his thankfulness to Song Hye-kyo.

"I cried a lot during filming whenever I got stressed, so much so that my nickname was crybaby. I give all credit and honour of this award to my partner Hye-kyo nuna who is a great senior and the most beautiful and lovely partner. Thank you, Hye-kyo nuna," he said.

In turn, Song Hye-kyo responded to him with equal gratitude.

"Most of all, I believe I am able to receive this award thanks to having met the best partner I could hope for, Mr. Song Joong-ki. I thank him once again," she said.

Due to the popularity of the drama and the great chemistry between the two on-screen, fans started pairing them together and even wished for a real-life relationship.

In a survey published January by online research company PMI, it was found that among all the on-screen couples awarded at the three South Korean broadcasters' year-end awards ceremonies, the two "Descendants of the Sun" stars are being supported most by the fans.

February 2017: Song Hye Kyo talked about love, relationships and marriage. In an interview with a fashion magazine, she admitted that she tries her best in relationships because she has a rosy view on love.

"I devote myself fully to a relationship and never turn back when it is over. If it doesn't work out, nevertheless (I devoted myself to it), it's just a relationship that will never work," she said.

May 2017: The Korea Herald reported that Song Joong-ki bought a two-story house with a basement in January in Itaewon-dong, Seoul for 10 billion won (S$12 million). Fans suspected that it's going to be his home with Song Hye-kyo.

June 19, 2017: Reports claiming Song Joong-ki and Song Hye-kyo are dating have once again surfaced, with claims that the two went on a trip to Bali, Indonesia together.

Both denied the reports immediately through their respective management agencies. According to Blossom Entertainment, Song Joong-ki went to Bali with friends before embarking on promotions for his upcoming film "Battleship Island" while UAA said that Hye-kyo was in Bali for a different project.

July 2, 2017: Song Joong-ki, Song Hye-kyo were reportedly seen by a fan at the airport, thus reinforcing the Bali escapade rumours.

This witness claimed that she stayed at the airport for three days after hearing that Joong-ki would be going to Bali. After seeing the actor, she stated that she also saw Hye-kyo a little while later.

July 5, 2017: Blossom Entertainment and UAA confirmed the reports of the couple's upcoming wedding via joint statement.

"Since marriage is also between families - as well as between individuals - they had to be careful… The two had to be cautious (about their relationship) until it bore fruit in matrimony," the agencies said.