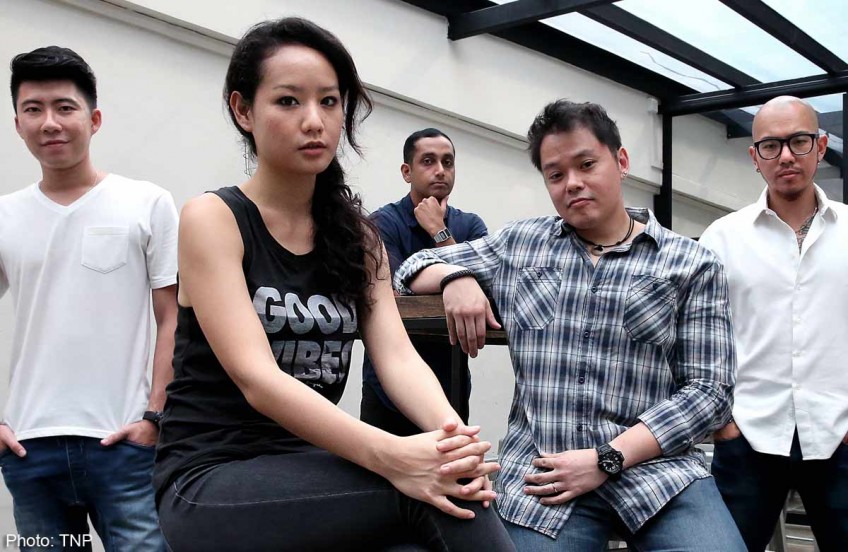 They may wear serious faces in promo pictures and play metal-tinged progressive rock, but the five members do love a good laugh - and the sea.

"When we started writing for our new album, we named parts of songs after fish... ikan kurau, shark, etcetera," band leader and guitarist Daniel Sassoon, 39, shared with M.

"But then we forgot what fish was what, so we had to go back to the drawing board," added drummer Jordan Cheng, 30.

Sassoon and Ling, formerly of pop-rock band Electrico, made headlines when they quit the band in 2008 and 2009 respectively. They had both joined it in 2003.

Said Sassoon: "I left because of different tastes in music and completely different visions." "Electrico have always been a trio. They've been playing together since the 90s and have a chemistry that comes from growing up together." "It's not like we were outsiders, but there was definitely a clique going on."

Ling, a freelance DJ and yoga teacher, said: "Electrico was good fun, but after being in a commercial pop band and thrust into the limelight, I needed a change." "There was so much more I wanted to explore in music and I joined Cutlass because it gave me the opportunity to experiment."

Although Ling and Electrico member Desmond Goh used to date, she clarified that they parted on good terms even before she left Electrico.

"Our break-up was never the reason for my leaving," she said.

Blending metal, jazz and pop into their lush, layered compositions, Cutlass released their first album, A Universe Made of Strings, in 2011.

Their sophomore offering The Kraken will be unleashed at their solo show at the Esplanade on April 24.

"Our first album was a little cold and precise." "But The Kraken sounds like a living, breathing organism, rather than something that was made on a computer."

Having performed in Hong Kong and the popular Urbanscapes music festival in Kuala Lumpur, this year, they hope to be selected to play in New York and London for Singapore: Inside Out, a travelling showcase taking local artistes overseas.

"We have a unique sound in the Singapore scene," Ling said. "It's very hard to define our genre."

Though they are open to having singers in future, Cutlass has kept their music instrumental so far.

"We don't have to deal with LSD - Lead Singer Disease!" joked Cheng. "Sometimes, their egos can be bigger than the drum set..."

Cutlass is also keen to work with more local musicians and contribute to movie soundtracks and arts performances.

Ling, who is dating Joshua Tan of local bands The Fire Fight and A Vacant Affair, said that the couple are writing songs together.

Sassoon and Ling felt that they have come further in their years with Cutlass than they did with Electrico, as their newfound liberty has helped them grow musically.

Said Sassoon: "The spirit of Cutlass is one of freedom." "We see ourselves as brigands sailing the high seas, having a really good time and not worrying about what others say."

In Each Hand a Cutlass: The Kraken