According to The Korea Herald, the 27-year-old celebrity applied for a naval band and honour guard unit in May. After passing a performance test and interview, Park was deemed qualified to be a member specializing in the piano.

Park was scheduled to start his service at the Navy Education and Training Command in Changwon, South Gyeongsang province, for basic military training before transferring to the Navy headquarters in the central city of Gyeryong, officials said.

His service is expected to end in April 2022.

Park's fans have been flooding the internet with farewell messages and candid photos of him entering the military.

Read Also
Which new Korean shows are coming to Netflix? 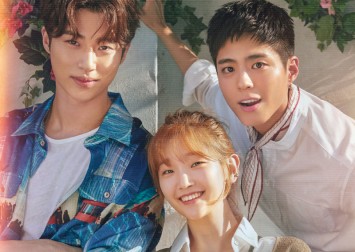 Twitter user @triyuliareveni wished him all the best in his enlistment.

“We will miss you and wait for you! Stay healthy and see you! God bless you,” she wrote.

His Reply 1988 co-star Lee Dong-hwi shared a blooper from the series on Instagram with the hashtag #seeyouagain.

Park has starred in a number of television series, including Hello Monster, Reply 1988 and Encounter. He was best known for his role as genius Go player Choi Taek in Reply 1988.

Prior to his enlistment, Park released his new song “All My Love” and finished three projects, namely Record of Youth, Seo Bok and Wonderland.

Featuring Park Bo-gum, Park So-dam and Byeon Woo-seok, the Record of Youth series will be available on Netflix on Sept. 7.