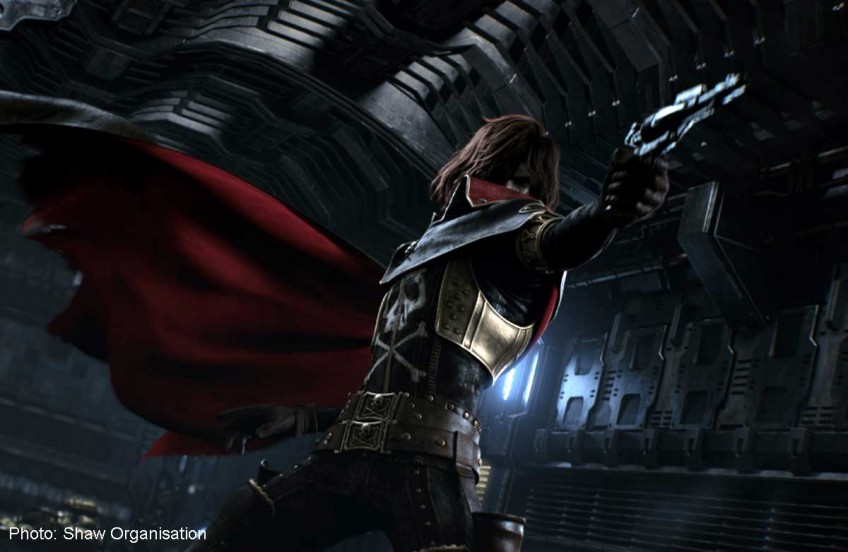 The adventures of the skull-festooned pirate first blazed across Japanese TV screens way back in 1978, just a year after the debut of Star Wars.

While that original series may have lacked the game-changing technical wizardry of George Lucas' seminal space opera, its characters and story were every bit as compelling.

Perhaps even more so.

"I loved pirates from a young age and wanted to be one," said Harlock's creator Leiji Matsumoto. "Pirates can travel the seas as they like without anyone to answer to.

"Nationality, borders and age don't matter to them in the slightest. That freedom was the appeal of the pirate.

"Even in my childhood, I knew that the skull and crossbones on their flags weren't there to scare people - they represent the will to fight until only their bones were left. They live freely, but they take full responsibility for their actions," Matsumoto said.

From his humble beginnings in the 1970s, Harlock has gone on to be an icon not just in Japan but across Asia and parts of Europe, particularly France and Italy.

There have been many adaptations of his story over the decades, each quite different from the next, but there has never been anything like this latest project.

Space Pirate Captain Harlock, opening in cinemas here tomorrow, is a US$30 million (S$37 million) stunner that finally gives the eye-patched anti-hero a grandiose backdrop worthy of his intergalactic antics. And that's not just our opinion. It won the prize for Best International Animated Feature at the 3D Creative Arts Awards in Los Angeles earlier this year.

It was also nominated for Animation of the Year at the Japanese Academy Awards in March.

"We wanted something we could be proud of," said producer Yoshiyuki Ikezawa.

He said that few animated films have the sort of widespread popularity and acceptance common to Hollywood films. But Japan's rich manga culture gave producers "a wealth of strong characters that have potential global appeal".

"Give such characters a story and theme that maximises their potential, add the advanced technology that Japan has to offer, and I was sure that we could create something that could wow the world," Ikezawa added.

Space Pirate Captain Harlock is both epic and intimate.

On the epic side, you have Harlock's mission to reset the Genesis Clock, which will give mankind a chance to start again after decades of war and regression.

But there is also intimacy in Harlock's tender relationship with his acolyte Yama, who joined Harlock's crew as a spy, but was won over by the charismatic captain.

Animation scholar Ryusuke Hikawa said that Matsumoto's work is characterised by an "artistic aesthetic" backed by extensive knowledge of the classics and the military.

"At the root of many of his stories are classic inspirations such as Wagner operas, medieval chivalry, Japanese legend or accounts of the Pacific War that are then flipped around to create new futuristic worlds," he said.

"His talent seems to house two minds - child and adult.

Of course, it should not be forgotten that, at the end of the day, Space Pirate Captain Harlock is just plain fun.

He captains a ship with a giant skull on its prow.

His best friend is a green alien babe.

The film's director Shinji Aramaki puts it best: "Harlock is the coolest of all Mr Matsumoto's character by far."

This article was first published on July 16, 2014.
Get The New Paper for more stories.