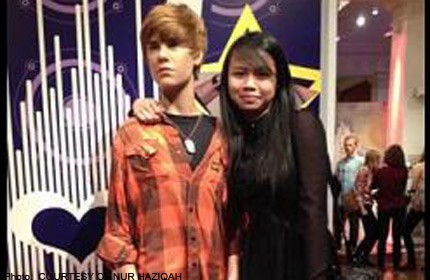 Contestants Nurul Farahin with her hand-drawn portrait of Justin Bieber and Nur Haziqah (above) posing with the wax figure of the singer at the Madame Tussauds museum in London.

SINGAPORE - The closest that Nur Haziqah, 19, has come to seeing Justin Bieber so far was when she travelled to the Madame Tussauds wax museum in London and posed with a wax figurine of the Canadian teen pop sensation.

With the two-minute-long video that she submitted to the ST Communities website for the Ultimate Bieber Fan contest which detailed her travel adventures in London, she might just be able to come within touching distance of her idol.

"If I have the chance, I will definitely ask him for a hug, autograph and take lots of pictures to post on Instagram.And I'll most probably not wash my hands forever after shaking hands with him!" says the tourism, leisure and hospitality student at TMC Academy (Singapore).

She is on an exchange programme in Liverpool, England, and spent half a day working on the video.

Bieber, 19, will be in Singapore for the Formula One Grand Prix's closing concert at the Padang Stage on Sept 23.

While he is here, he will do a meet-and-greet with the Straits Times reader who has submitted the best contest entry.

That reader and another 30 fans will each win a pair of tickets to the concert worth $296.

This contest is part of The Straits Times Appreciates Readers (Star) programme, which actively engages and rewards Straits Times readers and the community.

The competition is heating up, with 140 entries submitted to the ST Communities website as of Sunday.

Entries thus far range from portraits and photo collages of Bieber to videos and song covers.

Student Nurul Farahin, 16, submitted a hand-drawn portrait of the singer that she took an hour to complete.

"I decided to draw the portrait as I'm an art student and this is the best way for me to express how I feel about him. I really want to meet Bieber because we share the same birthday - March 1," she says.

But she is not so fanatical that she cannot be objective about some of the singer's more dubious recent actions, such as being caught peeing into a restaurant bucket.

She says it was "rather rude" of him and that it was "hilarious because it was so crazy".

Another student, Kimberly-Ann Tan, 17, decided to perform a cover of Bieber's song, As Long As You Love Me, on her guitar as it best expressed her sentiments as a Belieber, as hardcore fans are called.

"I actually picked up the guitar because of Bieber as I saw that he could play the instrument and I felt inspired to do so," says the Ngee Ann Polytechnic mass communications student, a Belieber of three years.

"I probably would be too excited to know what to say if I were to see Bieber for real," she adds.

The deadline for the contest is noon on Thursday.

The five best contributions will be shortlisted by judges and the winner will be determined by public voting, which will start on Aug 26 and end on Aug 29.

Results will be announced the next day. To enter the contest, go to bit.ly/1csOmWe.