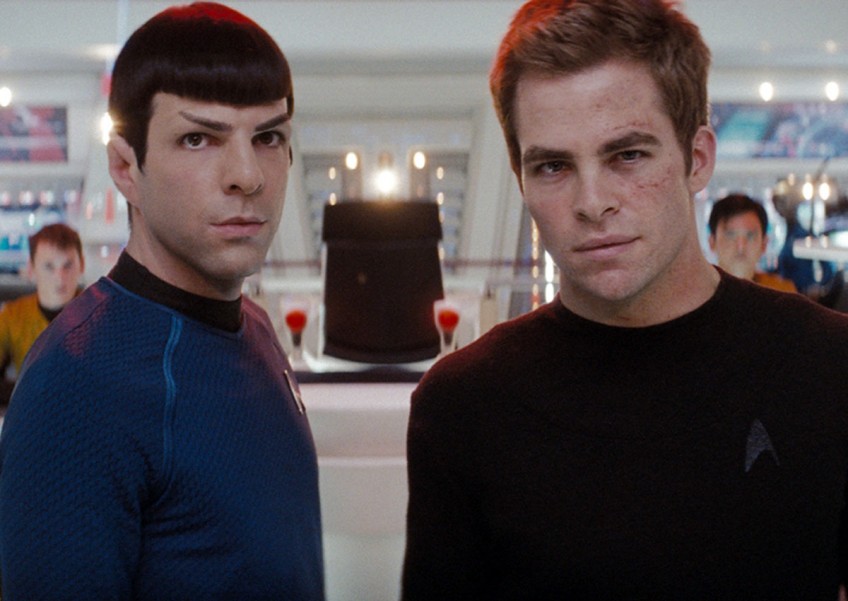 The crew of the USS Enterprise are back for more space adventures in Star Trek Beyond, the latest episode in the film reboot of the popular science-fiction series that marks its 50th birthday this year.
Starhub

LONDON - The crew of the USS Enterprise are back for more space adventures in Star Trek Beyond, the latest episode in the film reboot of the popular science-fiction series that marks its 50th birthday this year.

The television show, which introduced characters like Captain James T. Kirk and Mr Spock, a half-human, half-Vulcan first officer, followed the crew's missions. It has spawned movies and other series since debuting in 1966.

In Star Trek Beyond, Chris Pine and Zachary Quinto return as the younger Kirk and Spock alongside Simon Pegg as Scotty and John Cho as Hikaru Sulu.

This time, they face a new enemy when they are shipwrecked on an unfriendly planet.

"This movie has definitely a retro vibe to it," Quinto said at the film's London premiere on Tuesday.

"It's pretty remarkable for something like this to last for half a century and we're all really proud to be a part of it at this significant, celebratory milestone."

Quinto was joined by his co-stars, including Pegg who had the additional role of co-writer.

"It was a big responsibility, Star Trek is precious," Pegg said. "We wanted to do it justice in the most faithful way but we approached it like you would any writing job... studiously and carefully and never taking it for granted."

The movie has made headlines ahead of its release after Cho said Sulu is openly gay and married in the new film.

Actor George Takei, who portrayed the character in the original show and is gay in real life, has said he was "delighted" the movie included a gay character. But the new version of Sulu does not reflect the original vision of late series creator Gene Roddenberry.

"I had spoken to (Takei) and I knew that was coming... I hope that if he sees the film and sees the way it's treated... that maybe he'll see some of the positives in time," Cho said.

Last month, Star Trek Beyond actor Anton Yelchin was killed after he was crushed by his car and cast and crew have been paying tribute to him.

The movie is the third film in a recent relaunch following 2009's Star Trek and Star Trek Into Darkness in 2013.

Asked if he would be on board for more, Pine said: "Yeah, of course.

"If this one does well and they choose to do another one... As long as all my friends are back, I'll be back."