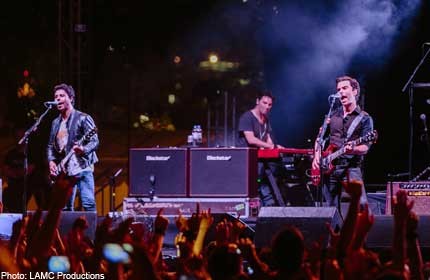 In their concert on Wednesday, Stereophonics ploughed through flawless rock 'n' roll numbers from throughout their decades-long career.

SINGAPORE - There was no flying footwear at Stereophonics' third Singapore show.

The last time the Welsh rock stalwarts played here, in 2010 at Fort Canning Park, lead singer Kelly Jones was hit squarely in the head by a slipper that an audience member lobbed at the stage.

Then, the band dramatically exited the stage for several minutes, leaving gig-goers wondering if the impolite act might have caused the concert to be cut short.

On Wednesday, however, the proceedings were totally drama-free - so much so that one couldn't help wishing something would happen to shake things up.

As at their last outing, they ploughed through flawless, no-frills rock 'n' roll numbers from throughout their decades-long career like they could have done it in their sleep.

The 90-minute set featured older tunes like Local Boy In The Photograph (from debut album Word Gets Around in 1997) and The Bartender And The Thief (1998), as well as a slew of songs from their latest album, Graffiti On The Train.

Though he wasn't much for small talk - barely addressing the crowd - front man Jones was in top form.

His distinct voice was rich and resonant throughout, especially on the aching ballad Been Caught Cheating (2012), leading my companion to remark that even live, it was CD-quality.

Overall, the gig often felt by-the-book, almost like the Phonics - as their fans call them - were just going through the motions.

Still, one can't fault their musicianship. And, judging by the satisfied looks on the faces of their loyal followers by the end of the show, that was more than enough.