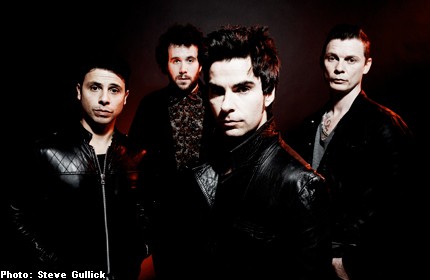 Singer Kelly Jones (foreground) is in talks to turn the Graffiti On The Train screenplay into a film. With him are (from left) Adam Zindani, Jamie Morrison and Richard Jones.

SINGAPORE - The last time Welsh rock stalwarts The Stereophonics played here in Singapore, someone in the audience threw a flip-flop at singer Kelly Jones.

On the slipper that hit him onstage, Jones says: "I do remember that. It hit me on the mouth, it came out of the dark."

The 39-year-old adds with a laugh in a telephone interview from Perth, where the band were on tour: "I think it was more a shock because nobody knew what it was."

The 2010 incident has not put him off coming back to play for fans here. The band will perform at Fort Canning on Wednesday, their third outing here. They first played in Singapore in 2008.

Indeed, the 21-year-old band are musical troopers, with five British No. 1 hit albums under their belt. Having outlasted many of their peers who emerged from the post-Britpop scene in the late 1990s, they are still actively touring worldwide and churning out new albums.

In March, the group released their eighth album, Graffiti On The Train, which peaked at No. 3 in the British charts.

The follow-up to 2009's Keep Calm And Carry On is their first album since they took a year-long break from touring between 2011 and last year - their first real time off the road in 15 years.

"It was a new approach to making a new record," says the singer. "The band normally try to make an album in between world tours and, this time, we decided to stop playing live and concentrate on the creative side of things. It turned out to be a really good experience."

Jones, a film buff, took the time off to focus on his other love - writing screenplays. One of them became the basis for the songs in the new album.

He is also in talks to turn the Graffiti On The Train screenplay, which tells the story of two runaways who try to find an escape after an accident, into a film which he hopes to release next year.

And while he considers the film a Stereophonic project, do not expect any of the members to make cameos in the movie.

"No, I don't think any of us are interested in being in the film. We just want to tell stories really, whether you're making music videos or making songs or trying to write films."

The release of Graffiti On The Train also marks another milestone for the group, which also include bass player Richard Jones, 39, guitarist Adam Zindani, 41, and new drummer Jamie Morrison, 30, who joined last year.

It is the first album that the group released on their own independent record label, Stylus Records, which they started after they finished their contract with major label Universal Music Group in 2010.

"It's a new experience for us. Obviously, you have to take a lot of risks, you have to self-finance the whole thing and you hope that the risks you take come back to support the people who work on the record. So far, I'm enjoying the experience."

Jones, who has two daughters aged eight and five with a former girlfriend, adds that these new experiences are what help keep the band still active after all these years.

"We try to challenge and push ourselves beyond directions we have been before. I think we've got a huge passion for what we do and a huge want to grow."

Their upcoming set at Fort Canning Park will please both new and long-time fans, Jones says.

When: Next Wednesday, 8pm