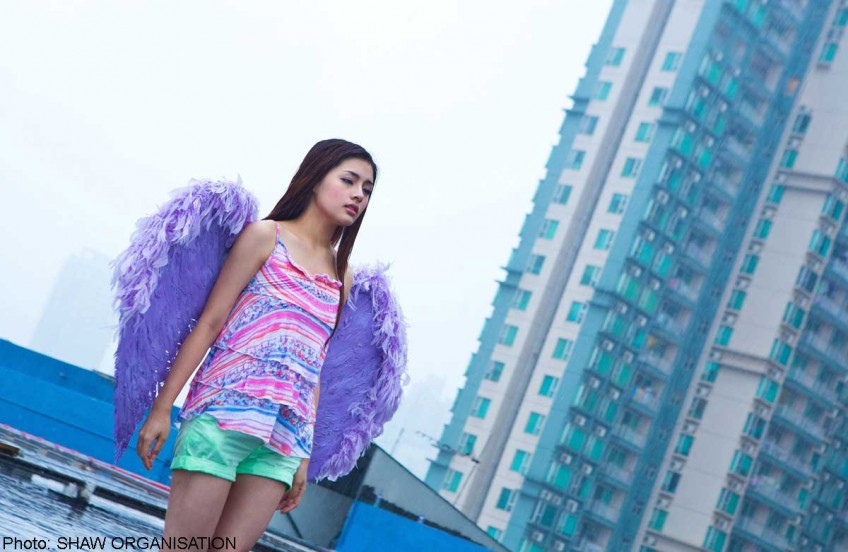 Troubled rich teen Yan (played by Kabby Hui, above) goes missing and her friends from WeChat, a messaging service, try to find her in May We Chat.

The story: Three troubled teenage girls find solace in texting one another through a smartphone messaging app. When one of them, the rebellious rich girl Yan (Kabby Hui), goes missing following a failed suicide attempt, it is up to deaf-mute Yee-gee (Rainky Wai) and the impoverished but feisty Wai-wai (Heidi Lee) to find her.

Going by the trailer, this looks set to be a scintillating work surrounding a very topical issue: The excitement and pitfalls of meeting strangers online, which in this case, is through popular messaging service WeChat.

Unfortunately, the movie never explores that deeply enough, simply presenting WeChat as a cutesy communication tool that young people like to use from time to time.

Only in one scene in the film does director Philip Yung (Glamorous Youth, 2009) hint at the potentially sinister consequences of connecting with total strangers through the service, when secondary school student Yan starts sending sexy pictures of herself to a guy she does not know.

Their first meeting in the flesh is nerve-racking to watch as you wonder if the man can be trusted, especially as he first spies on the girl from around the corner before finally approaching her.

Too quickly afterwards, however, the movie heads straight into melodrama, losing any of that edge that it had set up in the beginning. Of the three teenage protagonists, Wai-wai is the strongest personality as the spunky one who is hopeful about finding her missing friend.

The other two, spoilt rich girl Yan and deaf-mute Yee-gee, are given all the provocative scenes (including some graphic and very violent rape sequences) but their characters are so thinly drawn, they end up becoming rather dull to watch.

The biggest problem is that the film-maker seems to have no idea what he wants to do with his movie.

He throws in so many crazy plot twists and random minor characters that it is difficult for the viewer to connect with the story; worse, the numerous flashbacks confuse more than explain.

Most jarring is the inclusion of old footage from classic Hong Kong youth delinquent flick Lonely Fifteen (1982), whose stars Irene Wan and Peter Mak are cast here in small roles as jaded adults.

Director Yung was probably hoping to paint a grim picture of the folly of youth that carries on over several generations, but given how messy the script is, any attempt at a commentary on urban youth culture gets lost amid all the histrionics.