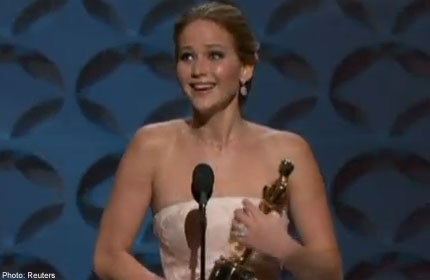 Comic-Con is the largest annual gathering of fans of the comic book, sci-fi and fantasy genres, drawing around 125,000 people over four days, and has become a major battleground for moviemakers.

In recent years the convention has seen more and more content showcased as studios fight to capture the attention of fans.

This year, 20th Century Fox delivered the biggest surprise, presenting the heavyweight stars of "X-Men: Days of Future Past," including Jennifer Lawrence, Hugh Jackman, Halle Berry, Patrick Stewart and Ian McKellan to an exuberant 6,000-plus crowd.

The new film will unite two generations of actors playing Marvel's "X-Men" heroes, as Bryan Singer, the director behind the original "X-Men" that spawned a franchise in 2000, uses time travel to have the older actors interact with the younger cast.

"Days of Future Past," due out in 2014, is a sequel to 2011's "X-Men: First Class," which introduced younger versions of the "X-Men" characters, with actors including Lawrence, James McAvoy and Michael Fassbender.

In an exclusive trailer shown on Saturday at Comic-Con, Jackman's Wolverine is seen traveling through time to his younger self, played by James McAvoy, to try to change the future.

Fox is not the only studio seeking to capitalise on the popularity of comic-book films.

Singer called the mixing of the two casts "extremely unique," and the film is likely to tap all key demographics with popular older and younger cast members.

Stewart gave a sly nod to the caliber of the ensemble cast, quipping: "I would like to play any female character in any 'X-Men' movie, because then I may stand a chance of winning the Academy Award," referring to Lawrence and Berry's Oscar wins.

Members of the "X-Men" cast feature in a plethora of other franchises with avid followings at Comic-Con - McKellan with "Lord of the Rings," Stewart with "Star Trek," Lawrence with "The Hunger Games," Anna Paquin with HBO's "True Blood" TV series, and Peter Dinklage from HBO's "Game of Thrones."

Lawrence was the main attraction during Lions Gate's "The Hunger Games" panel, where fans of the young adult film and book series were shown an exclusive trailer from the upcoming "Catching Fire" instalment due in theatres in November.

Disney's Marvel film panel, which rounded out Comic-Con's packed schedule on Saturday, did not skimp on surprises either, with actor Tom Hiddleston appearing dressed as "Thor" villain Loki, teasing the character's return in the upcoming sequel, "Thor: The Dark World," which was shown in a trailer to fans. The film is due in theatres in November.

Scarlett Johansson, Chris Evans and Samuel L. Jackson led the cast of "Captain America: The Winter Soldier," out in April 2014, and the audience was shown a new teaser for the film.

Zoe Saldana and Benicio Del Toro were joined by their co-stars of upcoming Marvel superhero film "Guardians of Galaxy," including Chris Pratt, Lee Pace and Karen Gillan, who showed off her shaven head for her role as 'Nebula.' The film will see a new cast of Marvel's characters joining forces.

Director Joss Whedon ran out onto the stage at the end of the Marvel presentation to announce the anticipated new title of the next "Avengers" film, "Avengers: The Age of Ultron." The film is due out in the summer of 2015.