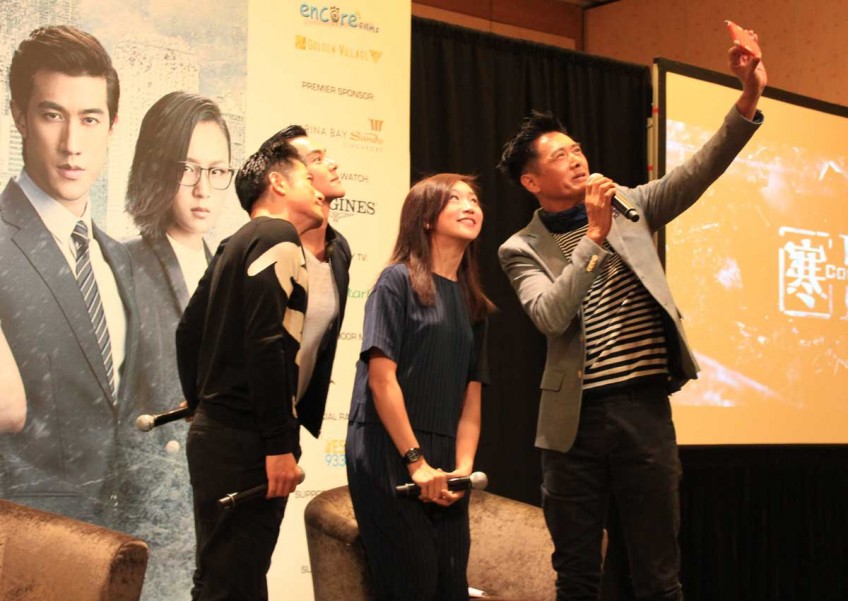 SINGAPORE - Hong Kong superstar Chow Yun-fat wants to prove he is the undisputed king of selfies.

Taking his title very seriously, the acting veteran declared he could snap a selfie with every person present in the press conference in under three minutes. The 61-year-old then bounded off the stage to prove it, making his way round the room to snap selfies with stunned journalists.

Chow's famously easygoing manner was on full display as he teased his co-stars Aaron Kwok and Eddie Peng, at a press conference on Tuesday (July 5) at the Sands Expo and Convention Centre to promote their new movie Cold War 2.

The highly anticipated sequel to the 2012 box-office smash Cold War, which grossed over US$50 million (S$68 million) worldwide, sees an all-star cast reprising their roles, with superstar Chow joining them.

Peng reprises his role as the son of Leung. He plays an intelligent and manipulative villain, working with powerful forces to take down Kwok's character.

Chow lends even more star power to the already stellar cast with his character Osward Kan, an influential senior counsel in the Hong Kong government.

The chemistry between Chow and his co-stars Aaron Kwok and Eddie Peng was overwhelmingly evident as they bantered among themselves and shared jokes about what happened on set.

Taiwanese actor Peng, 34, recounted how Kwok was so engrossed in his role that he "rough handled" him during a scene.

In the scene, Peng is handcuffed with his hands behind his back, while Kwok shoves him into the backseat of a police car.

"He pushed me against the car door, then threw me into the backseat, and nearly slammed the door on my feet," says Peng in Mandarin.

Kwok, 50, breaks into laughter, explaining that the director had not yelled cut yet so he had to continue acting. Caught up in the scene, he decided to shove Peng into the police car, forgetting that Peng's hands were bound. Peng landed face first into the backseat of the car.

"I feel like he did it on purpose, now that I think about it," Chow interrupts, with mock seriousness, as his co-stars burst into laughter.