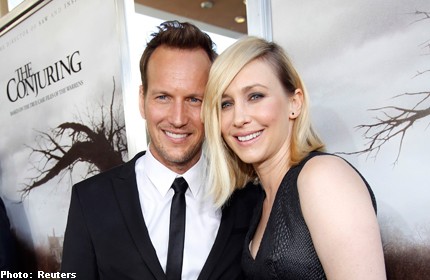 Patrick Wilson and Vera Farmiga (both above) play the ghostbusting couple.

NEW YORK - The plot of The Conjuring is like a run-of-the-mill horror film: A family moves into a secluded farmhouse, strange things start happening and paranormal investigators are called in.

Helmed by Malaysia-born Australian director James Wan, the film centres on a case handled by famed ghostbusters Ed and Lorraine Warren in the 1970s.

Another of their investigations became the subject of a book and many films, most notably The Amityville Horror (1979) and its 2005 remake.

Wilson, who plays the late Ed, a police officer turned demonologist in The Conjuring, tells Life! during an interview in Manhattan: "They started out as this young couple who heard that an old house was haunted. They showed up and she said: 'Listen, if my husband can paint this painting of your house and we give it to you, can we look inside?' And the fact that someone so blue-collar had an artistic side really appealed to me."

Stars include Vera Farmiga as Lorraine, Ron Livingston as head of the terrorised Perron family and Lili Taylor as his wife and mother of their five daughters.

The film is based on the accounts of Lorraine, a self-professed clairvoyant and psychic medium, and the Perron family (eldest daughter Andrea penned a book on their experiences in 2011 called House Of Darkness, House Of Light).

The chance to play a real person with such conviction in his beliefs in The Conjuring was too good to pass up, he says.

"I've to surrender to it and think, this is the guy that I'm playing, this is what he believes in. It's not up to me to go, 'Nah, that didn't happen'. I wasn't there."

Before production began, he and Farmiga drove to the Warren home in Monroe, Connecticut, where Lorraine still lives.

He says: "We wanted to, not so much get her blessing, but let her know we wanted to give a realistic and non-judgmental portrayal of these two people.

He also toured the Warrens' basement Occult Museum, which is featured in the film and houses "evil objects" taken from the more than 3,000 cases the couple claim to have investigated over the years.

"I was fascinated. To me, some of the things that carried the most weight were things that were left at a cemetery, like some kid made this with the intent to conjure something evil."

Does he believe in the paranormal? "I've never seen a ghost. But what I have seen are strange coincidences and, to me, it's all part of the same realm of there being something on another level that we're not privy to."

Nothing creepy happened during filming though he recalls the day the Perron family visited the set. "They got a call that their mother had fallen at home and they were all freaked out. The day that they leave her alone, she falls and she's injured. It was just a little strange."

Wilson has done two other spooky films - Insidious (2011) and its upcoming sequel, which were also directed by Wan, who was behind the Saw franchise.

Wan won Wilson over with his focus on building characters and suspense rather than going for cheap scares. "James has this mantra of no false scares. If something's scaring you, it's not going to be the cat," says the actor.

Wan also earned a new fan in Taylor, whose experience in the panned CGI- laden horror flick The Haunting (1999) left a bad taste in her mouth.

She says: "I've got scripts and heard from directors that they are not into CGI, but then you see it and you're like, oh, that's what all those red lights and cones were, I should have known. The Haunting ended up like that and director Jan de Bont said it was going to be simple.

"But the minute I talked to James, I knew he knows what's going on."

The 46-year-old indie darling, whose credits include Mystic Pizza (1988), Dogfight (1991) and I Shot Andy Warhol (1996), calls this film one of her most physically and emotionally draining, though she found a way to unwind after each day's shoot.

"There are these bird cams on the Internet. When I got home, I'd just watch the chicks being born, that was my happy place," says Taylor, who is married and has one daughter, according to reports.

Regarding the supernatural, she recalls an experience that spooked her years ago: "I was doing theatre with these kids. One night, lights were going on and off, there were doors slamming and weird sounds. Whatever was in that house humbled me and I just have a healthy respect for it.

"I had always thought I wanted to see ghosts - I don't."

She says she had heard of Amityville, but had not connected the dots with the Warrens. To her, meeting Lorraine was the most bizarre event of the film.

"She's like a sweet little grandmother. You'd never know that she's a ghosthunter. It's like that 'truth is stranger than fiction' kind of thing."