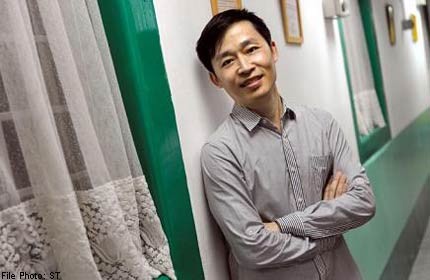 Ma Que Xian Zhu Zhi by Cultural Medallion recipient Liang Wern Fook (above) had been reportedly banned from the airwaves for its dialect content.

SINGAPORE - When news broke last Thursday that the song Ma Que Xian Zhu Zhi (The Swallow With A Bamboo Twig) could be played on radio, film-maker Royston Tan, 36, was so excited that he immediately posted it on Facebook.

He says, with regard to dialect content: "I hope that we can open up even more. Give dialect a chance, it's a part of our culture."

The song Ma Que Xian Zhu Zhi by Cultural Medallion recipient Liang Wern Fook had been reportedly banned from the airwaves for its dialect content.

It was first released in 1990 as part of his album Xin Jia Po Pai (Singapore Pie), but has had a new lease of life in recent weeks as it is featured in the new movie, That Girl In Pinafore.

The restriction on dialect content is tied to the launch of the Speak Mandarin Campaign in 1979, which aimed to replace dialects with Mandarin among Chinese Singaporeans.

The use of dialect in popular culture is hence seen as undermining the spread of Mandarin.

Programme director for Capital 95.8FM Bukoh Mary points out, though, that times have changed and, over the years, there have been cases of "one or two lines of dialect" appearing in pop music.

For example, the song One Half from the local film 881 (2007) includes some Hokkien.

While the supposed ban predates the formation of the Media Development Authority (MDA) in 2003, in order to "provide clarity to broadcasters", the agency informed the broadcasters that the dialect in the song is not excessive and is hence in line with content guidelines.

According to MDA's guidelines on radio content, "songs in dialects in a programme may be allowed provided the context justifies usage and is used sparingly".

The spokesman says: "MDA notes that the song is essentially about memories of growing up in Singapore. MDA's view is that the song has cultural merit and local relevance. It is composed in the xinyao tradition and will resonate with many."

Xinyao is a local music movement which emerged from campuses and flowered during the 1980s and early 1990s. Liang was one of its leading lights.

Liang, 49, says: "This song is about my feelings towards my own country and yet it's not an official patriotic National Day Parade Song. After all, xinyao bubbled up organically from society."

Included in the song are three lines sung in Cantonese, including "My dad used to live on Hoi Shan Street", "My mum gave birth to me in Tekka" and "A little sparrow with a bamboo twig, it's best to return to one's own home". There is also one line in Hokkien: "My cousin is back from San Francisco."

There is a rich sense of time and place in the lyrics as well as a keen sense of affection and pride in one's country.

Liang sings at one point: "This here is Singapore/Once, we had nothing/Although what we have now isn't much/We treasure it more than others".

The message about home struck a chord with writer-director Chai Yee Wei, 37, as he had spent some time abroad in the United States studying at the University of Michigan at Ann Arbor. It was partly why he included it in That Girl In Pinafore.

A music video of the track was posted on YouTube on July 23. It has since generated more than 56,000 hits.

Programme director for UFM 100.3 Carine Ang calls the track one of her favourite xinyao tracks and adds that the radio station has received SMSes from listeners to "say that they are happy to hear this song on radio".

While Ma Que was silenced on FM radio, it could be heard on subscription radio station Rediffusion.

Liang recalls that it even topped the broadcaster's charts for three weeks. He says: "It might have resonated even more strongly if it had received greater airplay."

Still, it is not too late for Swallow to take flight now. Ms Bukoh says: "Listening to it now feels very heartwarming and the message that home is still the best is great, particularly as National Day is round the corner."