Sweet night with the Infinite boys 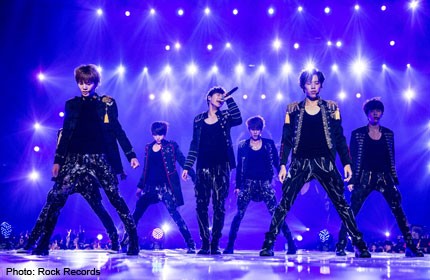 SINGAPORE - It was a night of sweet nothings at South Korean boyband Infinite's first solo concert in Singapore.

Here as part of their maiden world tour, One Great Step, the seven boys of Infinite were every bit the darling to their fans, saying honeyed words - in English, mind you - that stole the show during the two-hour concert on Saturday.

Turning up their charm, the lads' mushiness ran the gamut from cheesy declarations of love to amusing words of affection.

Doe-eyed 21-year-old Lee Sung Yeol said cheekily: "If you ever cheat on us, I will chase you to the end of the world."

Of course, he meant that he wanted to chase the fans to get them back, not to get back at them.

"Our hearts belong to you," confessed Nam Woo Hyun, 22, who even got down on his knees, with a ring and a rose in hand, to "propose" to a lucky fan girl during his solo performance.

Talk about unabashed "fan service" from the youthful pop stars, aged between 20 and 24.

The enthusiastic crowd reciprocated with deafening screams, which more than made up for the visible pockets of empty seats among the audience.

Gone are the "cold and hungry" days when Infinite debuted three years ago; they are now bona fide hallyu idols.

Describing the band's rookie days at a press conference on Friday, the 22-year-old Hoya said: "From time to time, I do think about those (early days). But I don't miss those moments. We were cold and hungry then."

One of the fastest-rising K-pop groups on the scene, Infinite earned their crowning glory in December when their song, The Chaser, topped the United States Billboard's list of 20 Best K-pop Songs.

Standing out from the pack is the band's leader, 24-year-old Kim Sung Kyu, who could be heard belting out the high notes during the group's tunes.

He shone the brightest when he took the stage alone to croon the ballad 60 Seconds. His powerful vocals, backed by a simple piano accompaniment, resonated through the stadium.

Every member of the band has a strong suit, and 21-year-old singer-actor L knew just what his appeal was - his boyish good looks.

Never mind his nasal, high-pitched singing voice, he got fans swooning with his adorable antics - a coy smile, a lingering look into the camera, a playful kiss on a huge teddy bear.

So alluring were his actions during his solo performance that it prompted Lee Sung Yeol to say: "I want to be that teddy bear."

Ending the night on the same saccharine sentiments was youngest member Lee Sung Jong, 20, who said: "I hope to see you again. See you in our dreams tonight."

Fans were certain to go to bed with sugary sweet dreams of Infinite that night.