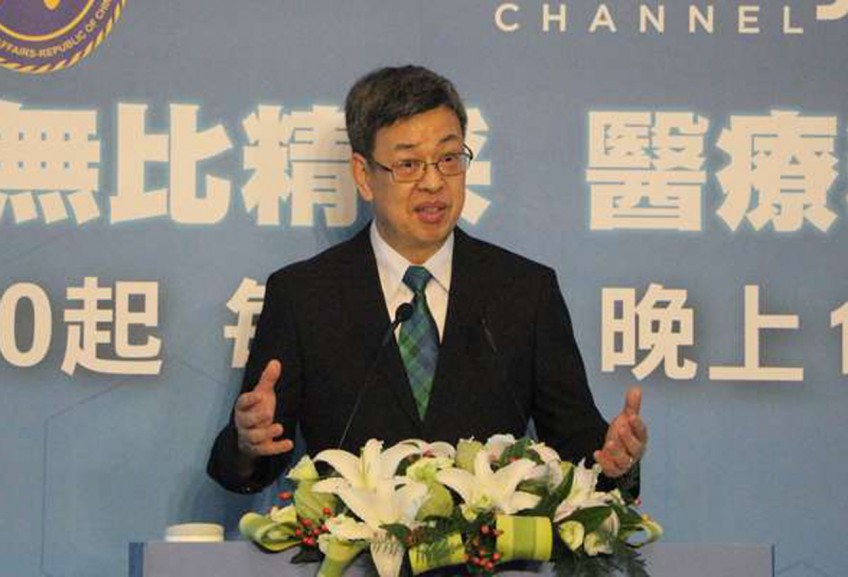 Vice President Chen Chien-jen (陳建仁) gestures during a speech at a press conference in Taipei on Tuesday, July 12. "Taiwan Revealed: Medical Elite," a documentary series, will present the stories of medical professionals in Taiwan to audiences throughout Asia.
The China Post

Taiwanese surgeons' life-saving efforts, both locally and internationally, are being highlighted in a new TV documentary series that will soon premiere across Asia to showcase the nation's medical achievements, the Ministry of Foreign Affairs (MOFA) announced Tuesday.

Speaking at a press event to unveil the series, "Taiwan Revealed: Medical Elite," Vice President Chen Chien-jen (陳建仁), himself a renowned epidemiologist, praised Taiwan's world-class medical care and technology as well as its national health insurance system that covers 99.9 per cent of its population.

Over the past five decades, however, the country has managed to eradicate or bring under control more than a dozen communicable diseases, such as malaria, black-foot disease and polio.

"In the past the international community helped Taiwan eradicate several communicable diseases. Today as a nation with advanced medicine and health care, Taiwan is returning the favour," he said.

"Our country has been transformed from a recipient to a provider of international assistance, enabling Taiwan to further realise the universal human right to medical care."

Through the documentary, the Discovery Channel's professional team introduces to audiences in Asia the "dedicated endeavours" of Taiwan's medical practitioners, he added.

Among those featured in the series are Chen's mentor, Lien Jih-ching (連日清), also known as Dr. Mosquitos, Chen said.

Lien is one of the medical professionals who helped eradicate malaria in Taiwan decades ago and who has also offered his expertise to fight the epidemic in Taiwan's African ally Sao Tome and Principe.

During the same event, Foreign Minister David Lee (李大維) said the latest series is another collaboration between MOFA and the Discovery Channel, which started in 2003 to produce films that document some of the remarkable people and most interesting aspects of Taiwan.

The two new episodes of the series will debut on July 20 and July 27 at 10 p.m. on the channel across the Asia-Pacific region, airing in 36 countries and markets to more than 200 million households, according to the Discovery Channel.