Taufik takes on Marty the Zebra 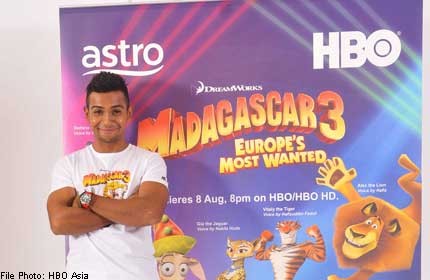 SINGAPORE - Do not try to out-Chris Rock Chris Rock. That's what local singer Taufik Batisah learnt last month when he was asked to voice Marty, the chatty, skittish zebra in the Madagascar animated films.

His Malay-speaking version of Marty will feature in a specially dubbed version of Madagascar 3: Europe's Most Wanted, which will air on cable channel HBO on Hari Raya Puasa.

After employing Malaysian stars like Lisa Surihani and her husband, film director Yusry Abdul Halim, for a Malay language version of The Smurfs last year, HBO cast a wider net for regional personalities to take on the iconic Madagascar characters.

"I didn't want to do Chris Rock in Malay. I didn't think it would be appropriate," Taufik, 31, told The New Paper on Tuesday before flying off to Kuala Lumpur for a press conference for the movie.

Even so, Taufik said he realised that Rock's signature high-pitched, rapid-fire talking is a defining characteristic of Marty's, and the film would feel different without it.

"I felt I needed to keep the energy that Chris gave for the character. Anything less than that would not match the animation that's been done," he said. So he had to try very hard to "force" a crazier, zanier version of himself out.

"It was a bit weird initially, but after a while I realised I just had to let myself go," he said.

The Singapore Idol winner had a weekend to study his script, before going into a studio in Kuala Lumpur for a four-hour recording session without any of his "co-stars" as everyone recorded their bits individually.

"It's so different from recording songs," he said.

"I had to look at the script and look at the screen to make sure what I was saying matched what was happening in the scene. Marty also has many lines in the film and some of them are very fast."

At the end of the session, Taufik said he could feel that it took a toll on his vocal cords. Still, he can't wait to find out what fans think of his version of Marty. "I appreciated the opportunity. I just hope I did it justice," he said.

In the meantime, Taufik is busy cutting contestants as a judge on Channel 5's reality singing competition The Final 1.

Explaining the triple whammy, Taufik said that the stakes have got higher and they were keen to have contestants with staying power.

He said: "We need... The kind of winner who has fans, even one fan, who will buy their record one year after the show. Age is not really a factor. We thought they weren't ready. In a year or two, they'll be really good."

Madagascar 3: Europe's Most Wanted airs on Aug 8 at 8pm on HBO (StarHub Ch 601) with both Malay and English audio options.