Taylor Swift in the spotlight 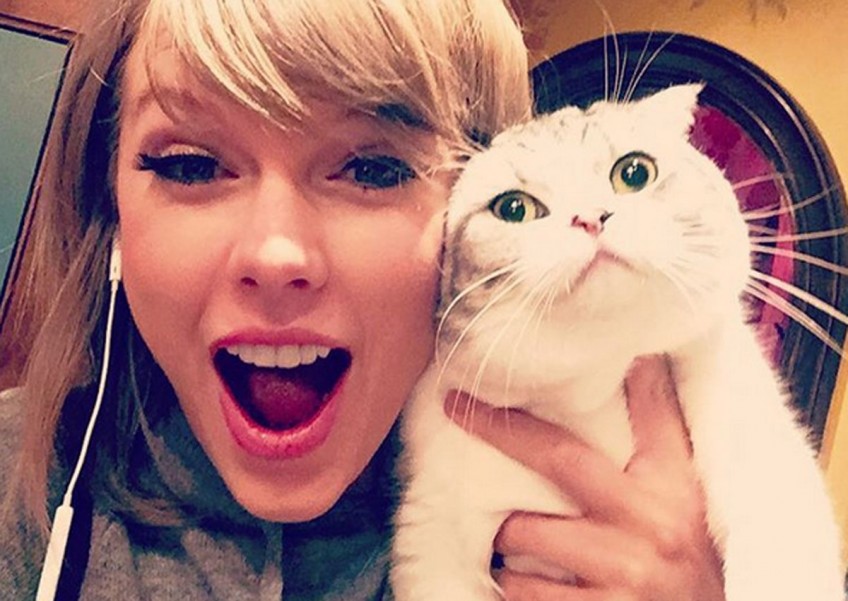 Taylor Swift is the name on everyone's lips these days and her star just keeps on rising.

The 25-year-old multi-Grammy-winning artist is the youngest celebrity to make Forbes' 100 Most Powerful Women list and she is 2015's highest-earning musician, raking in roughly US$1 million (S$1.39 million) a day.

Even the fashion industry wants her.

As if that isn't enough, the social media phenomenon became the most followed celebrity on Instagram this month with 51.6 million followers, dethroning US reality TV star and selfie queen Kim Kardashian, who has 49.5 million followers.

US diva Beyonce is third, with 48.4 million followers.

Her too-perfect-to-be-true image has, not surprisingly, invited detractors.

US talk show host Wendy Williams recently called Swift out on her "sneaky" tactics and compared her to the openly sexy Beyonce and Kardashian.

Williams dissed on her show: "She's got her girl army hypnotised to think she's the bee's knees... She's trying to trick us into thinking she's a good woman because she bakes and cooks and it's actually working right now on Instagram.

"For Kim and Beyonce, if you weren't so obvious about your thing and a little more covert, you two will be back on top of Instagram, but for right now, it's all about Taylor Swift."

But Swift, who is on her 1989 world tour, which will see her return to Singapore for two sold-out shows on Nov 7 and 8 at the Singapore Indoor Stadium, is taking none of this attention for granted.

She recently told Vogue Australia: "The public could change their minds about me tomorrow.

"Things are good right now, but I'm never going to be stupid, foolish or ignorant enough to think I have control over the public. All I can control is making good music.

"I am so lucky that people seem to like me right now, but in no way, shape or form is it a permanent thing. And I think being aware of that is what keeps you on the game."

She'll take a break after she finishes her tour in Australia in December, "to give people a breather from me".

In the meantime, she has almost everyone eating out of her hand - both in the real and online world.

Swift proudly shows off her ever-growing posse of ultra-inspirational celebrity friends, most of whom were in her star-studded Bad Blood music video.

During her concerts, US rockers Mick Jagger and Steven Tyler, US singer Justin Timberlake and even US talk show host Ellen DeGeneres have jumped at the chance to share the stage with her as special guests.

Thanks to Swift, #squadgoals has become a thing, with US host and E! executive producer Ryan Seacrest pitching a sitcom with that title.

"Because I always wanted them. It was just hard for me to have friends."

She added to Vogue Australia: "My friendship group is one of my favourite things about my life right now.

"Our friends really have each others' backs. It's the first time in my life that I've had anything strong like that in the friendship department."

Swift's close pal, US singer Selena Gomez, 23, said of Swift in a recent Flare magazine interview: "A bunch of women I look up to and admire are supporting one another and Taylor has such a beautiful way of bringing people together.

"That was good for me, because the more I started working, the more uncomfortable I was. I wouldn't trust people and Taylor has a way of stripping down everything and just getting down to being human. I love that."

Swift's short-lived romances with famous dudes like Harry Styles, Jake Gyllenhaal and John Mayer have been fodder for gossip.

But the person with whom she has been linked since February represents possibly one of her longest relationships to date. More importantly - to her fans, anyway - the Swifties approve.

One of her most-liked photos is the one where her Scottish DJ-producer boyfriend Calvin Harris, 31, piggybacks her during an Independence Day party with friends.

The image chalked up 2.5m "hearts" or likes.

Although Swift has not referenced Harris directly in interviews, he told UK's KISS FM back in July: "You know, it's not like every single time we go out we get a photograph taken of us. That's not the case. But for me, though, it could be a lot worse and I'd still be like insanely happy with her so I'm good with it."

Swift's Instagram feed can probably give @cats_of_instagram a run for its money when it comes to posting photos of furry felines.

Her two Scottish Folds, Meredith and Olivia, make frequent appearances and the cat ladies among her fans are obsessed.

This article was first published on October 21, 2015.
Get The New Paper for more stories.