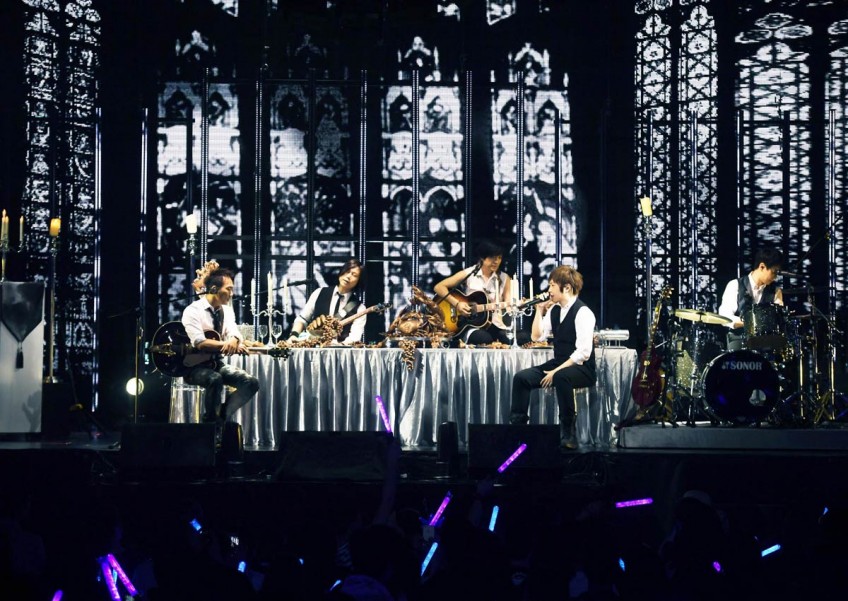 TAIPEI, TAIWAN - Mayday, one of the most popular rock bands in the Chinese-speaking world, came back to the venue where they first started 20 years ago to put on a free concert for fans.

Tens of thousands of people swamped the Daan Forest Park on Wednesday evening for the concert.

According to figures provided by the Taipei Rapid Transit Corporation, the number of passengers exiting the Daan Forest Park Station as of 7 p.m. - the opening time of the concert - had surged from the weekday average of 8,000 to 38,000.

Ashin, lead vocal of the band, thanked Mayday's fans for their over two-decades of support at the beginning of the concert.

"No matter where tomorrow takes us, let's march towards the next 20 years together."

Mayday performed 14 songs at the concert, which ended at around 9 p.m.

They also invited indie pop star Cheer Chan and members from fellow rock bands Quarterback and TOLAKU to be special-guest performers at the concert.

The seating area in the park's performance area can accommodate no more than 800 people, in which 400 seats were reserved as priority seats, officials said.

Those who could not enter the seating area watched the concert in other places in the park, where big LED screens had been set up.

According to local media, many fans camped overnight in hopes of securing one of the 400-available seats.

Among the campers were a couple in their seventies, who told reporters that they admired the sincerity of the band.

B' In Music, Mayday's agency, opened the venue to fans at around 1 p.m.

The crowd at the park were largely orderly on Wednesday afternoon.

The company had earlier urged fans not to queue overnight, saying that the concert was meant to bring happiness for fans and not frustration.

It was not only Mayday fans that were prepared for the concert, the Taipei City Government was fully prepared as well.

The local government predicted as many as 20,000 had turned out for the gig.

Five hundred staff and officers were deployed around the park in order to ensure public safety and smooth traffic.

The Taipei Rapid Transit Corporation implemented an emergency adjustment to the train schedules.

Previously these plans had only been applied on New Year's Eves.

Trains on the red line, travelling from Tamsui to Xiangshan, and stopping at the Daan Park station departed every 3 minutes and 10 seconds after office hours.

Taipei Metro claimed to have been able to commute as many as 3,000 passengers per hour.

Some police officers suggested that that the concert was even harder to handle than demonstrations in terms of security.