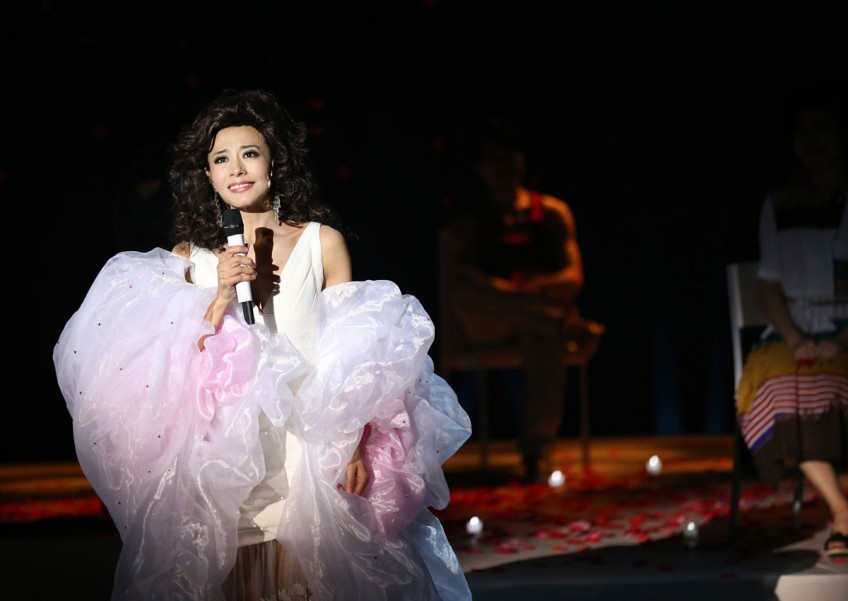 At one point in the Teresa Teng Musical, the titular character played by Hong Kong actress Perry Chiu, having started a new life in Paris, sings: "May I live a life of bitterness and joy."

Both emotions run like twin leitmotifs through this two-hour retelling of the late Taiwanese singer's fleeting but dramatic life. They are keenly felt, thanks to a thoroughly researched script by Chinese playwright Sha Yexin and the prodigious choices of Teng's songs, edited into short excerpts that lend the plot poetic heft.

The musical charts Teng's life, starting with a short stint in the United States in the 1980s, then through the next few decades as she rose to become a household name in the Chinese-speaking world.

It also portrays her string of brief and unsuccessful relationships with Chinese movie star Jackie Chan and Beau Kuok, son of Malaysian billionaire Robert Kuok, whose names are altered in the staging.

Sha has extracted and fleshed out the most vivid bits of Teng's life, giving audiences a peek into the emotional turmoil of a performer forced to choose between career and love. The script is also illuminating in its exploration of Teng's fraught relationship with the mainland - a Taiwanese born to Chinese parents, her popularity and influence were exploited by politicians on both sides, and she felt constantly torn between her birthplace and her ancestral home.

The show makes clever use of Teng's songs to propel the story forward. A close reading of Teng's lyrics reveals her skill in weaving her personal experiences into songs universal in their appeal - one example is How You Speak, a gentle rebuke to a heartless lover.

She also deserves a commendation for belting out about 20 songs in quick succession although her voice lacks the gentleness and slight tinge of melancholy that endeared Teng to listeners.

To this reviewer, her acting felt cloying at times and lacked nuance. One such scene was when Chiu as Teng addressed audiences in China over a broadcasting system - a poignant speech that could have been laced with shades of Teng's yearning for home was instead screamed out.

Chiu fared better with acting companions on stage to serve as a foil to her energy, such as during a bruising confrontation with the Kuok matriarch, as well as a revealing scene where she confides in her helper about the repression in her early life ("I'm only going to live for myself from now on," she declares).

Nonetheless, the show proved a hit with its full-house audience, which comprised mainly elderly folk. As Teng's classics such as The Moon Represents My Heart and I Only Care About You played on stage, some took out their camera phones to snap photos, while others hummed along softly, as if transported back in time.

For both the old and the young, the musical is an entertaining and nostalgic revisiting of Teng's life and transcendent appeal, one most timely on the 20th anniversary of her death.

This article was first published on Jan 25, 2016.
Get a copy of The Straits Times or go to straitstimes.com for more stories.