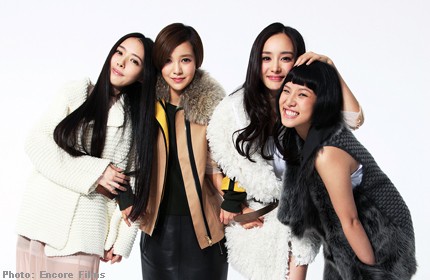 ARISTOCRATS: Writer and director Guo Jingming's movie tells the story of four best friends who are living the high life in Shanghai.

Decked out in luxury brands, the four best friends are living the high life, but, amid their materialistic pursuits, we see the pitfalls that come with it.

Take girl-next-door Lin. She tries her best to fit in after she gets hired at a fashion magazine, but the job strains her relationship with her boyfriend, Jian Xi (Li Ruimin). Yes, it is all very The Devil Wears Prada.

Meanwhile, Lily is the leader of the group, the queen bee. She is a go-getter, but not exactly from high society.

This poses a problem for her boyfriend, Gu Yuan (Kai Ko), who faces pressure from his mother to marry someone of his social standing.

And there's Nan Xiang, a penniless fashion designer, and Ruby, a national badminton player who yearns for a boyfriend.

With too many characters, Tiny Times failed to deliver any solid conclusions for the many storylines it contained.

Although the acting and editing of scenes were quite cheesy at times, it was rather heartwarming to watch the clique band together for support.

Tiny Times, which was adapted from writer Guo Jingming's novel, is just part one of four instalments which Guo will direct.

The extravagance portrayed in the film has drawn flak from critics, who called it shallow, among other things.

Although lacking in substance, the film did its job in entertaining me. I'm glad I don't have to wait long for the sequel, as it premiered in China last Thursday.