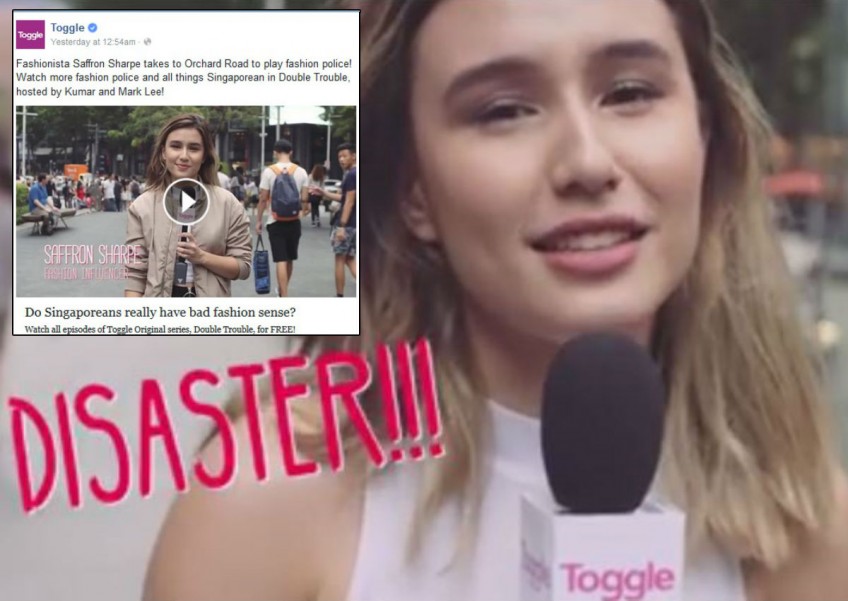 SINGAPORE - Online video streaming service Toggle has apologised for a video posted on its Facebook page, after netizens accused it of being insensitive and offensive.

In the video, social media personality Saffron Sharpe critiques the fashion choices of some members of the public on Orchard Road. While the faces of the people involved were censored out, they seemed to be unaware that they were being criticised and filmed.

The Internet was however, not amused and found the show to be distasteful and offensive.

Toggle, which is run by local broadcaster Mediacorp, subsequently responded to feedback by removing the video on Tuesday night.

In a statement released on its Facebook page, Toggle said: "We're so sorry. We never meant to cause hurt or insult. The 'policing' was part of a publicity campaign for an upcoming programme, done in the same tongue-in-cheek, irreverent way we might critique celebrity fashion. It wasn't intended as a serious judgement of the way any of us dress.

Sharpe also posted an apology on her Facebook page, saying that the comments she made on the segment were "rude, insensitive and thoughtless".

"I apologise if I have hurt, affected or disrespected anyone with the video I hosted. Despite the fact that it was a scripted programme, I now understand that it is no excuse. (In) hindsight, the statements I made came out rude, insensitive and thoughtless," she wrote. [embed]https://www.facebook.com/saffron.sharpe.5/posts/730464393762736[/embed]