Popular Taiwanese TV hostess Dee Hsu has become the latest target of Chinese mainland nationalists after she addressed the island’s Olympic athletes as “national players” in remarks seen as violating the one-China principle.

Affectionately known as Little S, Hsu has showed strong support through her Instagram posts for the island’s athletes in the Tokyo Olympics, including women’s badminton silver medallist Tai Tzu-ying and men’s badminton doubles gold medallists Lee Yang and Wang Chi-lin, as well as Lin Yun-ju, who clinched a bronze along with his partner Cheng I-ching in the mixed table tennis doubles.

In describing the quarter finals between Tai and her Thai opponent Ratchanok Intanon last Friday, Hsu – who is also an actress and singer – said the match was so fiercely fought it made her stomach cramp because of the high emotion. She praised Tai for being “super sharp”.

In response to an internet user’s query, she said she wanted to invite “our national players” to her house for a meal, a comment meant to be a joke. But it riled mainland netizens.

The online community was also upset with Hsu over another comment after Tai took silver following a close battle with China’s Chen Yufei in the women’s badminton singles final on Sunday in which Hsu said: “despite your defeat I am still proud of you”.

The online critics thought Hsu should never have supported Tai, who said after the finals she was happy to win a medal for Taiwan, a reference the nationalistic netizens believed showed Tai backed Taiwanese independence. 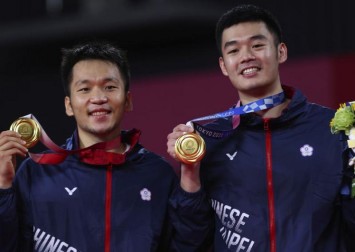 The internet users then flooded the TV hostess’ Instagram and Twitter-like Weibo accounts with furious comments, calling Hsu a traitor and suggesting she quit show business on the mainland. Some even claimed Hsu was trying to use the Olympics to present Taiwan as a country.

“Get lost, you two-faced person. If you are so keen on supporting Taiwan independence, you should never come to China to earn our money,” one said in a Weibo post.

Another said instead of addressing the island’s athletes as “national players,” Hsu should have called them “provincial players, as Taiwan is a Chinese province”.

Some threatened to boycott the Chinese products endorsed by Hsu, prompting at least three companies sponsoring her – sex toy maker Osuga, haircare brand Clear and beverage brand Shou Quan Zhai – to announce via their Weibo accounts that they were terminating their contracts with Hsu.

“The national interest is above all [and we] resolutely support the one-China principle,” the beverage company said, adding “the nation’s interests are more important than anything else,” and that the company would terminate all brand partnerships with Hsu effective immediately.

Hsu’s 15-year-old daughter Elly was fired as the face of fashion label Jorya, according to Jorya’s Weibo account.

The terminations were expected to cost Hsu at least NT$32 million (S$1.5 million) in lost income. Hsu, who has since deleted the comment about the “national players” reference, said in a Weibo post “let me have some peace” when asked about her reaction to the cancelled brand partnerships.

Taiwanese singer Jolin Tsai was also targeted on Monday after congratulating several of Taiwan’s athletes at the Olympics, with mainland netizens questioning her political stand because she had failed to congratulate mainland Chinese Olympians. 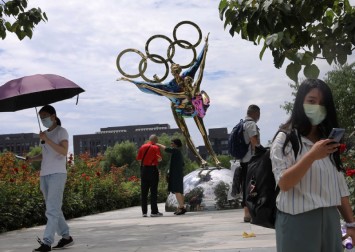 Beijing, which claims sovereignty over Taiwan, has not ruled out the use of force against the island. Strained cross-strait relations in recent years have also led to heated and usually vitriolic debate between people on either side of the Taiwan Strait when it comes to the highly sensitive Taiwan independence issue.

The war of words has become fierce since Tsai Ing-wen of the independence-leaning Democratic Progressive Party was elected president in 2016 and strongly promoted the Taiwan-centric ideology that in recent years has fanned anti-China sentiment on the island. Relations between nationalists of both sides have soured even further during the Olympics.

Many Taiwanese entertainers have been forced to take sides in the debate over unification and independence.

Hsu, once viewed as a supporter of the mainland by Chinese nationalists, was lambasted by Taiwanese netizens along with her sister Barbie Hsu and singer Christian Fan early last year for accusing the island’s government of being inhumane over its export ban preventing face masks being sent to the mainland.