Tony Leung finally gets to act with Kelly Chen 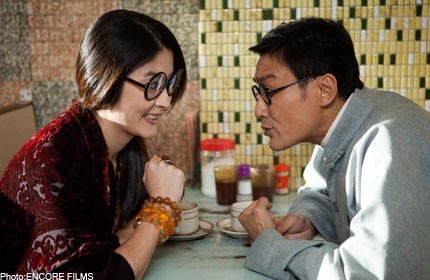 It was not the notion of making a supernatural film that got veteran Hong Kong actor Tony Leung Ka Fai nervous.

Rather, he was daunted by the prospect of working with Hong Kong singer-actress Kelly Chen in horror anthology Tales From The Dark 1.

Speaking to Life! over the telephone, the 55-year-old says in Mandarin: "I'd never worked with her before even after all these years of being in the industry, so I was really quite nervous. I was worried that we would have nothing to talk about."

His worries turned out to be unfounded - the two clicked instantly over the common topics of family and raising children, he says.

"Now that Kelly is a mother, she asked me for tips in raising kids and what my experiences were like. We ended up chatting a lot, actually. It was very easy getting to know her outside of filming," he says cheerily.

Chen, 40, has two young sons - Chace, four, and Riley, 15 months old. Leung has a pair of twin daughters, now 21, the age where they are looking for romantic partners, he says.

Most young girls, he adds, will want to find boyfriends who are on a par with their fathers in terms of social status and personality.

But seeing as their father is an award-winning actor, would that search for a good-enough match not be especially challenging?

Leung quickly deadpans: "Yes, I think it should be really quite tough."

He and Chen star in the anthology's second film, titled A Word In The Palm. Playing friends and fellow store owners - he is a fengshui master and she an expert in healing crystals - they come together to solve a mystery surrounding the drowning of a schoolgirl.

Tales From The Dark 1 also features Stolen Goods, a segment directed by Leung's peer, Simon Yam, a behind-the-camera role Leung has no intention of trying at the moment. "Maybe in another two years," he says.

Moreover, the noted character actor jokes that he would rather recast himself as an idol so that he can make more money.

He says with a chuckle: "I've been known as a good actor but never as an idol. I think I should learn from some of the young Hong Kong idols and try to go down that same path, because they just look good and can make so much money.

"If I were an idol, fan clubs would also be set up just for me. Now wouldn't that be great?"