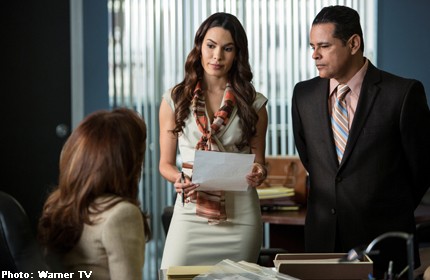 SINGAPORE - It's rare to find a series that really makes me think.

I'm not talking about whimsical daydreaming or flights of fancy - none of the fluffy stuff.

Instead, Major Crimes involves deep soul-searching and raises questions about society's practices, to which I have no answers to.

Couch potatoes who don't want to flex their brain power should probably change the channel.

Normally, I wouldn't touch anything requiring ruminating about ethical practices with a 10-foot pole.

I get a violent adverse reaction (cue major headache) when forced to debate what the "right" response is in various situations.

But stranger yet was the package in which my principles were tested - a cop show.

It certainly wasn't what I was expecting when I read the title.

Forgive the awful title. Every bit of brainpower behind the scripting went to making the show smarter to the nth degree.

The show doesn't stop when they catch the bad guy. It stops when he is behind bars. And surprisingly, there's a big difference between the two.

So get ready for your notion of justice to be challenged by Californian laws and the Los Angeles Police Department.

Is offering a cold-blooded killer a plea bargain for manslaughter, instead of first-degree murder, justice served?

The short answer, obviously, is no.

I, myself, was quite convinced of this at the start.

So then, choose the "right" thing and pursue first-degree murder?

Congratulations, you have just agreed to spend millions of dollars of taxpayers' money pursuing a court case for years that may not actually end with a lethal injection.

The manslaughter plea on the other hand, waives the suspect's right to an appeal and allows him to begin doing time almost immediately.

In other words, confirm, chop stamp will go to jail.

But are plea bargains justice? Is drawn-out justice fair?

I guess that depends on which school of ethics you subscribe to. This is, however, a little too serious for this TV column.

Suffice to say, I find the issues - and the show - riveting. Also, I like learning random tidbits of information.

For instance, did you know that in California, you can't plead guilty to a felony for which the maximum punishment is the death penalty? I didn't.

Anyway, more on the show.

There's no character whom I love or hate. It's actually a good thing.

It's not that I'm indifferent to them, it's just that they are so realistic, no character is simply good or bad. They are so believable, I find it hard to side with one over the other.

The show itself, however, has a messy start - information and exposition is in scant supply - and takes a while to get into gear.

But stick with it and you will discover one of the more insightful cop shows on the box.

When it comes to realistic cop drama where the straight forward black and white of good and bad turn to a moral maze in grey, Major Crimes is a major find.

Major Crimes premieres on Aug 20 at 9.50pm and subsequently airs every Tuesday at 9pm on WarnerTV (StarHub Ch 515).