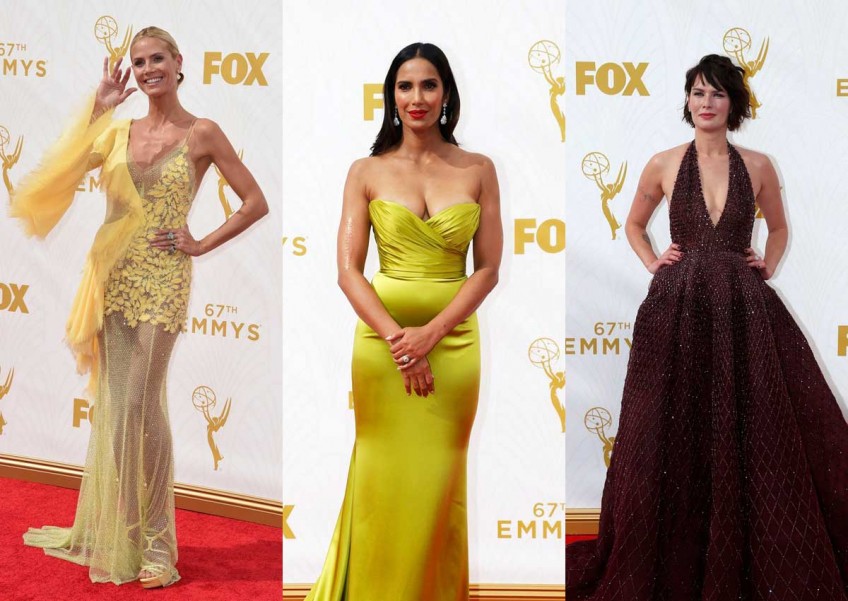 Temperatures soared past 90 degrees Fahrenheit (32 degrees Celsius), prompting the stars to mop their brows, touch up their make-up and talk about their top tips for staying cool.

The following are briefs from the red carpet: what they wore, thoughts about the upcoming fall television season and other tidbits.

As ever, black is a can't-miss look on the red carpet.

Before the show, she tweeted: "Good luck to all my new friends on #AHS at the #Emmys tonight! I'll be there to cheer you on!" Her co-star Angela Bassett - who sang the praises of the pop star's acting talent - looked svelte in a colour-block black and white gown with an asymmetrical neckline.

"She's everything that I thought she would be - creative, generous, warm, funny," Bassett said of Gaga.

First-time nominee Tatiana Maslany, the star of BBC America's "Orphan Black," went for the opposite, rocking a sleek white pantsuit with a plunging neckline from Bouchra Jarrar with strappy black heels.

"The character is so powerful," said Henson, who is tipped by many to become the first African-American to take home the Emmy for best actress in a drama series.

"Cookie represents the American dream. She came from nothing and built an empire." When asked about the second season of the soap opera set in the music world, which begins on Wednesday, she said, "It's crazier... We're pushing all envelopes."

Christina Hendricks - who is nominated for a sixth time as best supporting actress in a drama for her work as Joan Harris, the no-nonsense office manager who becomes a partner on "Mad Men" - glittered in a long-sleeved Naeem Khan gown.

She said she was looking forward to seeing her former co-stars, noting: "It's a little bit of a reunion for us tonight."

The Emmys red carpet is often all about the fashion. But this year, Amy Poehler's Smart Girls, an organisation founded by the "Parks and Recreation" actress to help encourage curiosity, is looking to take the red carpet chatter up a notch.

The group is partnering with the Television Academy and Twitter to launch the #SmartGirlsAsk campaign. A special area was set up on the red carpet where stars will answer questions submitted on Twitter.

A few of the questions submitted: From "Grey's Anatomy" and "Scandal" creator Shonda Rhimes (@shondarhimes): "What is the best piece of career advice someone has given to you?" From Secretary of the Interior Sally Jewell (@SecretaryJewell): "Climate change impacts people & places everywhere. How can you raise awareness & inspire action?" From Republican presidential hopeful Jeb Bush (@JebBush): "How can we work together to improve education so all children have a chance at success?"