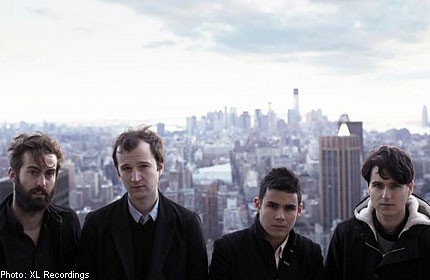 SINGAPORE - Vampires (together with werewolves and, lately, zombies) have long stalked popular culture, so it's a miracle that the New York indie rock quartet Vampire Weekend have managed to give vampirism a fresh spin.

They aren't exotic creatures from the American Deep South (like those sexy model types from True Blood), but rather deceptively average-looking dudes.

On their third album - a mellifluous love letter to their Gotham City - they have transformed into modern bloodsuckers, sniffing out the metropolis with urbane ennui. Imagine notorious psychopath Patrick Bateman from Bret Easton

Ellis' novel American Psycho sprouting a conscience and getting himself into a moral quandary before each kill, and you get an idea of the album's shadowy pleasures.

Vampire Weekend are growing out of their preppy, Afrobeat-cribbing phase and waking up to adulthood's more complicated worldview, especially the fact that there are people who hate Americans.

"Is this the fate that half of the world has planned for me?" Ezra Koenig pleads in Unbelievers, a ditty incongruously driven by chugging guitars and thumping drums.

Their single Step nails the piquantly moving sentiments - these privileged folk have traversed Angkor Wat and Anchorage, yet something's amiss. Youthful innocence? What?

"The gloves are off, the wisdom teeth are out/What you on about?" the singer moans sweetly in Step, sounding both lovesick and devil-may-care, as the churchy organ drones and the drums shuffle to a dragged-out beat.

It's The Great Gatsby, but updated for the millennials - with Koenig and company tethering their qualms to some of the band's strongest melodies.

So you'd dance maniacally to Diane Young, a Strokes-styled garage- rocker, abuzz with requisite spitfire guitar and distorted percussion, and tethered to a sprightly vocal tour-de-force by Koenig who scrapes the basso profundo of Elvis at one point.

"Nobody knows what the future holds/And it's bad enough just getting old," he complains over a salvo of cyber-rockabilly shoot-outs.

You agree and check your pulse.

Album of the week

1. Modern Vampires of the city

Listening to creepy folks such as Tom Waits and Portishead may do the same too. How else can one explain the euphoria as I imbibe the weird purring of David Lynch and Baths' Will Wiesenfeld?

Auteur Lynch, 67, isn't much of a warbler, but on his second solo album, his fraying wheeze stealthily waltzes across this desolate soundscape like that small man dancing across a red room on Lynch's cult TV show Twin Peaks.

The Big Dream is dunked in blues, but the results feel as comforting as a widow's veil. Lynch covers Bob Dylan's The Ballad Of Hollis Brown with a deadly cocktail of mournful and menacing. Yet, he struts in the happily reverbed Sun Can't Be Seen No More.

Similarly, Wiesenfeld, 24, is a Californian electronic whiz who achieves rapture while plumbing depths. On his second album Obsidian (which means a tough, dark, volcanic rock), he wrestles with inner demons in the wake of a near-fatal bout of E. coli.

His glitchy electronica, infused with piano loneliness, pulls no lyrical punches, but the music raises you up. He rants at the powers that be in Worsening, but is wont to see beauty in such songs as Miasma Sky and Ironworks, sounding sanguine amid sprinkling shards and piano chords. You applaud and hug him.

He's known locally as music mentor, impresario and newspaper scribe. On his latest solo outing, Kevin Mathews has morphed into a midnight troubadour in the mould of Sheffield's Richard Hawley or Chicago-based Kevin Tihista.

Emo Fascism, to be released on July 31, is a gently fuzzy ode to heartbreak, traversing synth-pop, soul and jangly rock with grace and gravity.

I'm not too keen on the overwrought album title, but the jazz-pop direction is perfect foil.

The Sade-esque, clubby grooves of I Lost Myself are so lustrous, you'd miss his delicious bitching about "peace and love and all that jazz".

His voice is reedy and raspy - this works well in a piano dirge like Cliche, which Billy Joel would have elevated into a bittersweet sing-along. The night ends with a relentlessly upbeat dance ditty called (M.O.a.O)- a move so unexpected, you'd allow him those few minutes of silly indulgence before the sun rises.

Pre-order Emo Fascism for US$10 (S$12.60) on kevinmathews.bandcamp.com/releases

5. The Boy & The Broken Machine

Unsigned, Joe Brooks, 25, is the anti-Justin Bieber who hasn't shot into the stratosphere; an older Greyson Chance who remains grounded.

Look past the floppy fringe and boyish looks, and you'd admire the independent chap who makes things happen for himself.

Hope runneth over in the Briton's latest EP, The Boy & The Broken Machine. Punchy opener The Island declares: "Time to go big or to go home!"

Hear the easy, soul-lite melodicism he might have learnt from Jason Mraz in Six String Soldier; or from the dreamy Carousel, where he segues into a falsetto you'd melt for.