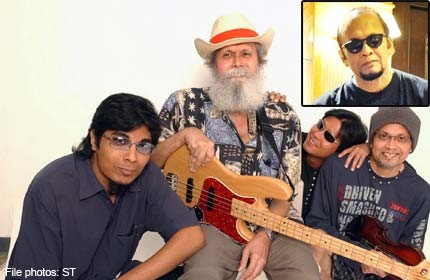 Jansen, 62, who cycled regularly, was found by a passer-by in the Bukit Panjang nature park near his home at around noon on Tuesday.

He was taken unconscious to the National University Hospital with a fractured skull and died at about 7.30am yesterday.

His wife, Ms Christine Neo, said doctors removed a blood clot from his brain, but his condition worsened.

"It's shocking and happened too suddenly," Ms Neo told My Paper over the phone yesterday.

Jasen was a vocalist and multi-instrumentalist who played the flute, harmonica and violin for Heritage, which is believed to be one of Singapore's oldest surviving gigging bands, having been formed in the 1970s.

Heritage represented Singapore twice at international jazz festivals and, in 2007, was recognised with the Artistic Excellence Award at the 12th Composers and Authors Society of Singapore awards.

Heritage has held a regular spot at the JJ Atlante Pub in Duxton Road since 2004.

Speaking to My Paper yesterday, a distraught Ashley, 64, said it is too early to determine what will gappen to the band.

Younger brother Gordon, 57, who lives in Perth, Australia, previously played drums for Heritage. He said: "It still hasn't sunk in. We can't believe that something like a bike ride... has developed into this."

The wake will be held from this evening at the Church of St Mary of the Angles in Bukit Batok East and a funeral service will be held on Sunday.

Jazz veteran Jeremy Monteiro wrote on Facebook that Jansen "embodied many of the attributes in a Singaporean that are missing these days".

"He was never jealous of envious of anyone and celebrated that successes of others, he freely expressed himself through his music and bared his heart and soul every time he performed," he wrote in the lengthy tribute.

Mr Danny Loong, the co-founder and chief creative director of the Timbre Group, called the musician a "shining light" in the local music industry, who set an example for others to follow.

Ashley said that Jansen was a "good son, a good husband and a good brother".