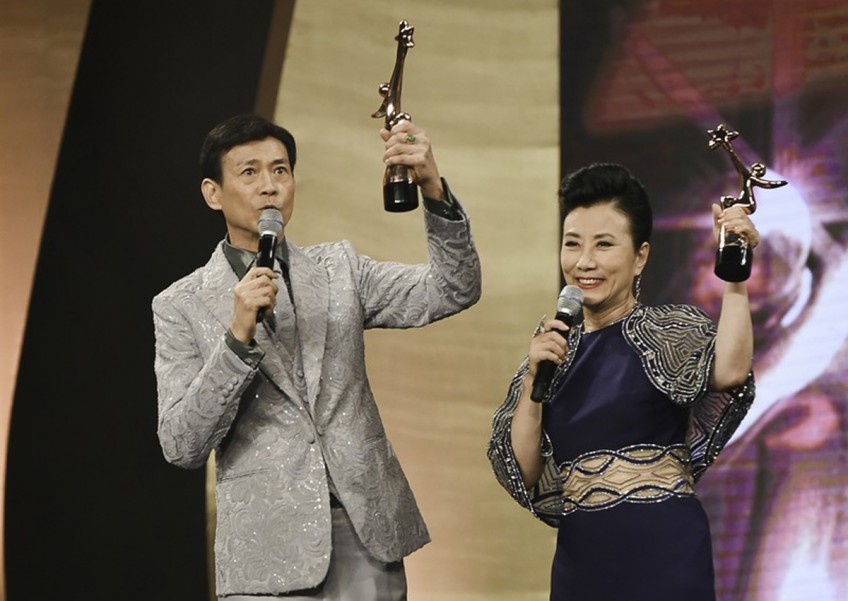 She, along with actor Adam Cheng, were bestowed the commemorative Star of the Stars, a special award introduced this year to artistes who have "forged a strong affinity with the local audiences across his or her multiple roles throughout the years".

Wang, 68, also won My Favourite TVB Actress award for her role as a career-minded singer who wants to reclaim missed moments with her family.

The versatile Wang also shared the My Favourite TVB Variety Show Host award with her Sunday Songbird co-hosts Cheng and Jerry Lamb. Wang made her TVB debut in 1971 as a host on variety show Enjoy Yourself Tonight. She went on to carve out a successful acting career with roles such as a difficult mother-in-law in period comedy Wars Of In-Laws (2005).

Cheng, 68, said that looks like if I want to win a hosting award, "I can't leave her." The pair are also worked together in dramas. They are regarded as TVB's golden couple of the 70s, romancing each other in classics such as wuxia drama Romance Of The Book And Sword(1976).

The gala ceremony, which is a fan event organised by Hong Kong TV station TVB and local cable operator StarHub, was in its sixth year. This year's theme was Walk Down Memory Lane, as a "a timely round-up to Singapore's Jubilee celebrations".

Another two big winners of the night were actor Edwin Siu and actress Priscilla Wong. The pair, who played police officer lovers in the drama Madam Cutie On Duty, won the My Favourite TVB On-screen Couple award.

They also became an item in real life.

He also got the crowd to sing Happy Birthday to his 34-year-old girlfriend, whose birthday was on Friday.

During backstage interviews before the show, he said: "We have very busy schedules. I must thank the organisers for inviting us, so that I can spend time with her."

Actor Ruco Chan won the My Favourite TVB actor award for his dual role of criminal and prince in Captain Of Destiny, a time-travel drama that also won Favourite TVB Drama.

Actor Vincent Wong won My Favourite TVB Supporting Actor for his role as a correctional services officer in prison drama Tomorrow is Another Day.

The event will be broadcast on Oct 31 on TVB First (StarHub TVB Channel 860).