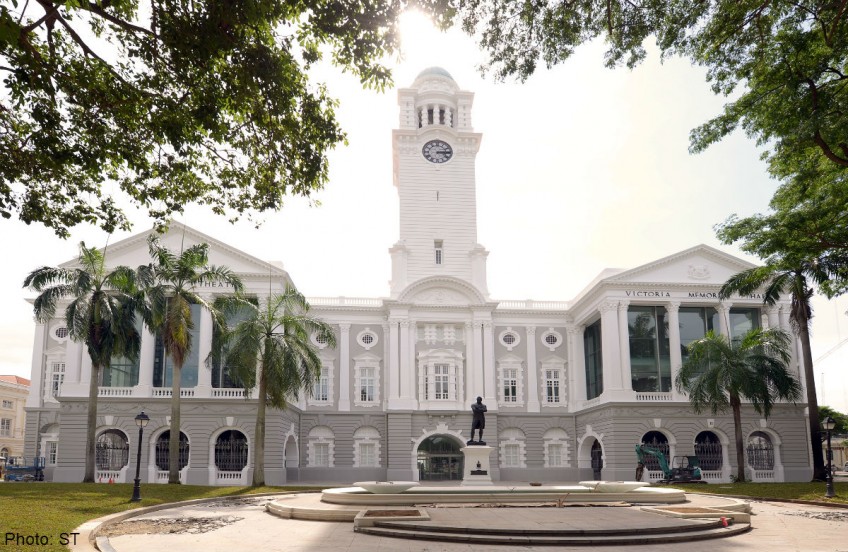 The facade of the newly reburbished Victoria Concert Hall and Victoria Theatre.

SINGAPORE - When the doors to the refurbished Victoria Theatre and Concert Hall open tonight for a by-invite-only concert presented by the Singapore Symphony Orchestra (SSO), the audience will be ushered into a grand atrium with a soaring glass roof befitting the status of the iconic venue.

Once inside, members of the audience will sink into plush, roomier seats with much improved legroom between each row and enjoy state- of-the-art acoustics and better views of the stage.

But to the layman, the most striking feature of the $158-million refurbishment is the creation of the atrium which connects the theatre and concert hall seamlessly.

W Architects referred to old images from the archives to restore a 1905 passageway between the two buildings and turned it into a public space, just the way it used to be in the past. They have added new side and back walls in precast concrete panels.

Each of these bears detailed architectural mouldings and pattern features which have been drawn from archived drawings of the building.

The original marble floor has been polished to such a glossy finish that those with high heels might do well to watch their step.

In a nod to the past, the architects have used 3cm-thick timber seat- backings from the old seats and mounted them on the walls of the foyer, creating a striking installation art piece.

Inside, the venues offer intimacy and old-world charm and fill the gap for medium-sized performance art venues here.

The chairs, made of steel and timber with foam cushion, are from Japan.

Gone is the mouldy smell, the carpets are plush, there are much improved views of the stage as the "nose bleed" seats in the balcony are gone.

The acoustics were handled by award-winning design group Arup, whose resume includes handling some of the most famous landmarks in the works such as the Sydney Opera House and the Bird's Nest stadium in Beijing.

Mr Nick Boulter, 58, associate principal, acoustic and theatre consulting leader of Arup, tells Life! that noise insulation had been a major challenge in the past and that back in the day, "bags of sand were used to keep the heavy doors of the concert hall shut, keeping out the noise from outside".

During the refurbishment, a new metal roof was built for the concert hall and a plastered ceiling was constructed beneath it to give good sound insulation. The ceiling has also been fitted with moulding and coffers to reflect sound to the back of the concert hall.

A void was created under the roof to house the ductwork and wiring needed for the acoustic systems and equipment. Transparent reflectors have also been installed at the stage to let sound be reflected within the stage area such that players on stage can hear one another.

In the theatre, the acoustic team was careful to avoid hard surfaces which would cause echoes. This was important in ensuring sound clarity.

Slightly curved acoustically transparent panels were used on the ceiling. Mr Boulter says not only did this fulfil the architectural requirement of having a curved ceiling, but the flat and stepped panels were also carefully designed to reflect sound to the audience below.

In addition, the design also allowed the theatre to be quiet enough such that an actor would not normally require a microphone. On a media tour last week, architects Mok Wei Wei and Ng Weng Pan of W Architects highlighted the special care taken to retain several old architectural elements. For instance, artisans were flown in from South India to work on pillar carvings. Out of the 35 artisans who worked on restoration work, about 25 came from Tamil Nadu in south India.

Mr Mok, 57 says: "They have good experience in Indian temple architecture, which usually involves elaborate sculptures and statues. It was something we needed for the restoration works."

Among the several challenging aspects of this project was taking care of the original St Clair Organ, which was installed for the inaugural concert in 1931.

In 1984, the fully mechanical German Klais Organ replaced the St Clair Organ although the original St Clair Organ facade was retained. For the restoration works, the Klais Organ was removed piece by piece - a total of 2,012 pipes - repaired and stored in climate- controlled warehouses during the refurbishment period.

Apart from the care taken in handling many key elements with a rich and layered history, several spaces have been opened up to present architectural elements that have not been seen for almost 30 years or even longer.

One such space was the office of the SSO. It is now home to the ticketing counter and will have food-and- beverage options. Here, you get to see striking pillars with impressive carvings.

In all, more than 600 workers worked on the project every day and the total number of man hours spent on the refurbishment of Victoria Theatre and Concert Hall over the four-year period adds up to 2.85 million hours.

The National Arts Council says the return of Singapore's oldest performing arts centre promises to fill a gap for mid-sized venues in the local arts scene. Before it closed for refurbishment, there were about 200 performances in Victoria Theatre a year by local and foreign troupes as well as school and community groups. The same number of shows is expected when the venues open.

Mr Mok lauded the council for its "very enlightened brief". The idea was to transform both spaces into modern facilities with improved acoustics while preserving their Victorian architecture and heritage.

The award-winning local firm has worked on conservation and restoration projects, including the National Museum of Singapore, and it has displayed its sensitivity and understanding of original structures in the refurbishment. Mr Mok said: "We enjoyed every aspect of this project. When you work on something like this, you need a certain kind of aesthetic and approach as well as the understanding that you are dealing with history."