Westlife wants to collaborate with BTS

Today in surprising music news: Westlife asked BTS if they could do a duet together.

Yep, let that sink in. During an interview with Westlife on MBC's Section TV, the reporter mentioned that K-Pop is gaining more attention and asked if there's anyone from the K-Pop world they are interested to work with.

"Guys, let's do a duet! BTS, come on. BTS and Westlife, that would be awesome," the Irish band said.

Westlife started in the 1998. Their self-titled album as well as Coast to Coast, World of Our Own, Unbreakable, and Turnaround were a worldwide hit. They actually have 33 number one albums. They are also Guinness World Record holders to be the first ones to achieve seven consecutive number one singles in the UK-now that's a big feat. 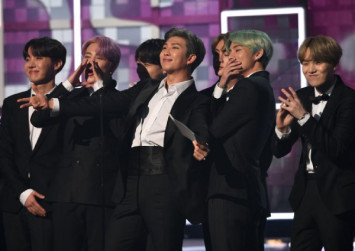 BTS on the other had just broke records at the Grammys for being the first K-Pop group to present. They've sold millions and millions of copies of their album and also holds a Guinness World Record for "having the world's most Twitter engagements for a music group." They are also the first K-Pop group to win a BBMA and was featured on Time's international edition as Next Generation Leaders.

So yeah, if these two bands work together, it would be epic. Do remember that this will not be the first collab between Westlife and K-Pop because they previously worked with BoA for "Flying Without Wings."

Are you excited to hear the two boybands join forces? I am very much intrigued.